The top week during the last four years was in June 2006, with 126 single-family permits pulled.

Home sales rose in Greenville during August compared with July, but declined in Spartanburg, the Tri-county area of Anderson, Pickens and Oconee, and also shrank statewide, according to new data from the South Carolina Association of Realtors.

Unit sales were up 18 homes in Greenville to 607, while Spartanburg home sales declined by eight units to 217; and sales in the Tri-county area were down 41 units to 213. Statewide, sales were down 241 units from July to 3,952. Read More.

Posted by Michael Dey at 2:14 PM No comments: 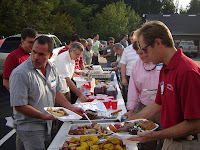 Thank you to everyone who attend last night's Associate Appreciation Night! The evening was all about saying thank you to our associate members for the support and involvement they give to your association. About 90 attendees enjoyed steak and lowcountry boil on a beautiful fall evening.

A BIG thank you goes to our builder sponsors for making this event possible: 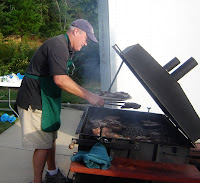 Thank you also to our cooks for the evening, Jonathan Giles and Nick Bowman.

If you missed out on the opportunity to attend this event, make sure you check out our other upcoming events, like our Builder After Hours at Palmetto Exterminators on October 12, or the next HBA General Membership Meeting and SPIKE Appreciation Luncheon on November 19 at the Hilton. To learn more, visit our website at www.hbaofgreenville.com and frequently check back at Builder Review Daily for more information!

Posted by The Home Builders Association of Greenville at 11:59 AM No comments:

If you attended the latest Builder After Hours at Jeff Lynch, you know what a great networking event this can be!

The next Builder After Hours is Monday, October 12 at 5:30 p.m. at Palmetto Exterminators in Greer. Join other members of your association for dinner, drinks and great door prizes.

Is your business suffering an immediate financial hardship? For example, has your business suffered:
The U.S. Small Business Administration is offering a special deferred payment, interest-free loan for small businesses that have been profitable in the past but are currently suffering a temporary cash-flow problem. The loan program is part of the Federal Economic Stimulus program and expires on September 30.

Two HBA of Greenville banking members have made loans in South Carolina as through the program:
You can find out more about the program, as well start the application process, by visiting:
http://www.sba.gov/recovery/arcloanprogram/REC_ARCLOAN_WHERE.html
Posted by Michael Dey at 9:03 AM 1 comment:

Members of the Home Builders Association of Kansas City recently created a powerful video for NAHB about their struggles in the current housing market and why Congress needs to extend the tax credit to save the home building industry.

Click here to see the video.
Posted by The Home Builders Association of Greenville at 2:29 PM No comments:

Representatives from NAHB and the Independent Community Bankers Association (ICBA) met with FDIC Chairman Sheila Bair and her staff Monday to discuss the troubling exam environment facing community banks. They told Bair and other FDIC officials that the excessively tough exam environment is having a significant effect on the ability of community banks to lend and support economic growth. The association continues to hear that examiners are overzealous and unduly overreaching and are, in some cases, second guessing banks and professional independent appraisers.

In some cases, ICBA said, examiners are making community banks downgrade performing commercial real estate loans solely because the value of the collateral has gone down and are demanding write-downs and reclassifications of loans based on forced sales of real estate occuring during illiquid or dysfuctional markets. They recommended better communication between the Washington office and field examiners concerning exam policies and that the FDIC ombudsman process be improved so that bankers could feel more comfortable appealing decisions made by field examiners.

Source: ICBA
Posted by The Home Builders Association of Greenville at 10:29 AM No comments:

September is Associate Member Appreciation Month, a time for us to recognize the tremendous contributions that our associates make to our local, state and national advocacy efforts, as well as to the overall power and influence of our association. Truth be told, the participation of our associate members is so important to the HBA that Associate Member Appreciation Month should really be celebrated all year round! The HBA Board of Directors wants to personally thank our associate members who are readers of this report for being actively engaged participants in our organization, and for all the assistance they provide on a daily basis to our builder members. The fact of the matter is, we couldn’t do what we do without you. We also strongly encourage all members out there to express your appreciation to an associate member today. Information on the NAHB Associate Members Committee is available on www.NAHB.org.

Also, don't forget that we're celebrating our associate members this Thursday, September 24 at Associate Appreciation Night, 5:30 p.m. at the HBA office. To RSVP, call us at 254-0133 or visit our website, www.hbaofgreenville.com.
Posted by The Home Builders Association of Greenville at 2:48 PM No comments:

Drywall imported from China that was used in home construction in the United States is causing some concern for homeowners and home builders, and has been a hot topic in the media this year.

Home owners have reported foul odors and air conditioning-related problems in homes constructed with some of the drywall imported from China. Additionally, copper components, and certain electrical and plumbing components might have a blackened appearance. It is believed the drywall was imported into the U.S. between 2004 and 2008. Some of this drywall is alleged to contain high levels of sulfur and/or other contaminants, which it is emitting or off-gassing. Governmental agencies are investigating the potential adverse health consequences of exposure to the sulfur gases. Little is known about the proper methods for investigating and remediating the drywall, which has led to concern for many on how to address the issue.

To help builders and other HBA members become knowledgeable about Chinese drywall and to learn about currently existing resources, NAHB has assembled a webpage with information to help builders learn about the issue so that they can answer home owner questions. To view this page, click here.
Posted by The Home Builders Association of Greenville at 9:59 AM No comments: