Law mandating utilities to participate in "Call Before You Dig" service

Governor Nikki Haley signed into law a requirement that all utilities with underground infrastructure must be a member of the "Call Before You Dig" association. Contractors sought the law to insure that when they seek information about buried underground utilities they will have a one-stop source for information before digging.

To read the complete story at GSA Business, click here.
Posted by Michael Dey at 11:20 AM No comments:

Homes of Hope announced that Quinn Satterfield will construct two new single family homes on Gower Street in West Greenville. The project is being funded by Resurgent Capital Services, an international manager of consumer debt portfolios.

Homes of Hope is a charity that works to meet the needs of low-income families through rental and home ownership opportunities. Its objective in West Greenville is to diversify and strengthen the community through housing opportunities.
Posted by Michael Dey at 9:55 AM No comments:

The South Carolina Housing Hall of Fame trustees has announced that Representative William
E. “Bill” Sandifer of Seneca and John Templeton of Charleston will be inducted into the prestigious honor society for their work in and support of South Carolina’s home building industry.

“We couldn’t have asked for two better nominees than Representative Bill Sandifer and Mr. Bill
Templeton because of their unwavering efforts to protect home builders and the American dream of homeownership,” said Kenneth E. Ormand, Jr., chairman of the S.C. Housing Hall of Fame Trustees. “The South Carolina home building industry has been fortunate to have these two champions working for the benefit of our citizens.”

Representative Bill Sandifer is one strong champion of housing who has had a remarkable affect
on the housing industry. He recognizes the impact which the housing industry has on the
economy and has worked tirelessly to protect it. Rep. Sandifer’s efforts have been instrumental in keeping home prices affordable so that all South Carolinians will have a chance to realize the
American Dream of home ownership.

John Templeton has had a long career in developing quality housing opportunities, which has
added to the quality of life for a large number of S.C. families. His professional career led to his
passion to advocate for property rights and affordable housing and his founding of the S.C.
Landowners Association. Mr. Templeton has been a leader in the effort to preserve and to even
restore the right of South Carolinians and people around the country to control their own property. His efforts have been instrumental in shaping and making successful what is likely the most significant property rights movement in the nation.

“Without the concern and actions of these two personalities, our industry would not have been
able to weather the recent economic storm and would not have been able to maintain the level of
strength which it has today,” said Ormand. “I congratulate the accomplishments of Mr. Templeton and Rep. Sandifer and I welcome them into the S.C. Housing Hall of Fame.”

Rep. Sandifer and Templeton will accept their nominations into the S.C. Housing Hall of Fame on
Thursday, July 14 during the S.C. Home Builders State Convention at the Myrtle Beach Marriott Resort & Spa at Grande Dunes. For information about the state convention, visit the HBASC website by clicking here.

To view a list of the members of the South Carolina Housing Hall of Fame, click here.
Posted by Michael Dey at 8:09 PM No comments:

In a speech on the economic outlook of the U.S. economy, Federal Reserve Chairman Ben Bernanke highlighted challenges in the housing sector as one reason why economic growth is weak:

"In contrast, virtually all segments of the construction industry remain troubled. In the residential sector, low home prices and mortgage rates imply that housing is quite affordable by historical standards; yet, with underwriting standards for home mortgages having tightened considerably, many potential homebuyers are unable to qualify for loans."

Read the rest of the report at NAHB's Eye on Housing by clicking here.

Read our post on "pundits" commenting on the housing market by clicking here.
Posted by Michael Dey at 2:20 PM No comments:

According to the American Banker, 22.7 percent of all residential properties with a mortgage had negative equity on March 31, 2011, down from 23.1 percent on December 31, 2010. The improvement has been attributed to improvements in home values in the markets most affected by the housing economic downturn, including Nevada, Arizona and Florida.

Read the rest of the report at American Banker by clicking here.
Posted by Michael Dey at 9:33 AM No comments:

Association Maximization Part 2: "Voice of One, Power of Three"

(Note: Most states have a state HBA with only a handful being the exception. This post will concentrate on the three level membership but understand the benefits of NAHB will work with the two level membership.)

Last week's post focused on the simple structure and lead purpose of the local HBA. This post will focus how your state HBA and NAHB interact with your local's membership bringing the "voice of one, power of three" concept into reality.

Your state HBA's lead purpose is advocacy. Advocacy is a description I have used for the local and now the state. I will use it again when we discuss NAHB because successful advocacy comes when members, builders AND associates, are united in the protection and growth of the building industry. The state HBA is similar in structure to the local HBA; officers lead by a builder member in the role of president and a board of directors made up primarily of builder members. This group of volunteers are individuals from each of the local HBAs throughout the state which gives the entire state's perspective on initiatives designed for the benefit of the majority of all members. A take on the old saying "you can please some of the people some of the time, but you can`t please all the people all of the time" is very appropriate here. In some cases, members at the state level will disagree on certain steps or direction. It's OK to disagree but if you do, have a valid argument! The idea is that once a vote on a course of action has taken place the board members should now unite behind the cause and bring unity to the local HBAs.

The reason for a state HBA? I described it as advocacy but advocacy only works with the power of one voice. Individually, members can visit their state legislators but they are viewed as individuals. But the collective working as one brings attention and the passionate collective brings change. Some locals opt to work separately from their state when it comes to lobbying but, as right as they think they are, they are wrong by not working as one for the entire building industry. Coalitions only work if all parties agree to work together. The state HBA is, in a way, a coalition of local HBAs.

The state HBA also offers a great way to expand your social capital and business contacts. Through state HBA involvement you will also learn about the building industry from an entire state's perspective with that perspective including, but not limited to, possible trends either legislatively and/or regulatory, that could be found in different sections of the state. "That's a northern territory issue has no impact on the coast" would be an example of one part of the state being under "attack" while other sections don't view it as a threat. One day your area will be under "attack;" wouldn't it be fantastic to have the whole state in corner? You see, the voice of one brings the awareness, the passion of that one brings the awareness into a victory for all. I can't stress this enough; advocacy + unity = success.

The National Association is similar in structure to the local and state HBAs. They have officers, all of which are builders, and a board of directors made up primarily of builders. This group of volunteers, just like the make up of state utilizing local members, is made up of leaders from all the United States and Puerto Rico. These leaders are from your very local. NAHB has, as do some state HBAs and local HBAs, an executive board which is much smaller than the actual national board. A lot of work is done through the executive board delivering a more streamlined "product" to the national board for guidance and direction then action. The purpose of NAHB? Unity, which brings the power of one voice through out the country, more importantly and with pinpoint accuracy, within the halls of congress. Meaning......... ADVOCACY.

As you can see from last week through today, your membership brings you the most important action which safeguards your career, your business, your family and your employees families; the ability to work with and help educate the legislators, at the local, state and national levels, that could derail your chosen profession. By your self you couldn't even begin to make a progress let alone an impact. It would be like trying to raise the ocean levels with an occasional drop of water.

The "Voice of One, Power of Three" mechanism, if embraced by you, is an exciting ride and the cost of a membership should be viewed as the cost of doing business in the most regulated industry in America. That cost becomes an investment for you personally due to the efforts, on your behalf, of the actively engaged leaders and professional staff, at all three levels,

I left out, in these first two posts, committees which are a necessary and a vital part of the structure of all three levels of your HBA membership. Next week's posts will we will talk about starting your involvement and committees will be included with what their purpose(s) mean to you and the HBA.

What: Open house to raise awareness of the HBI C-CORE mentoring program and allow youth from Greenville and the upstate areas to meet with adults who are looking for an opportunity to coach a young person toward a successful future.

Why: HBI C-CORE still has a need to engage more home building industry professionals from any facet of the industry to make an impact on young people’s lives through this mentoring program. C-CORE is looking for adults to serve as mentors and help identify community service projects the young people can participate in with their mentors.

Who: Youth from Greenville and the upstate who are enrolled in Job Corps; other workforce, training and employment programs; high schools; career and technical education schools; and juvenile justice and other community-based programs. Adults from Greenville and the upstate areas who are involved with the home builders associations, local business and housing-related organizations or members of the community.

About C-CORE Mentoring
HBI C-CORE is a new career-focused, industry-sponsored mentoring program that matches youth ages 16-18 interested in home building with adults in the home building community ranging from carpenters and contractors to real estate agents and appraisers. The national program, funded by a three-year grant from the U.S. Department of Justice, will match 5,000 youth with more than 1,600 industry mentors recruited from home builders associations, local business, housing-related organizations and their local communities.

Posted by Michael Dey at 9:48 AM No comments:

Howard Cox Honored as Top Agent for Self Insurers Fund 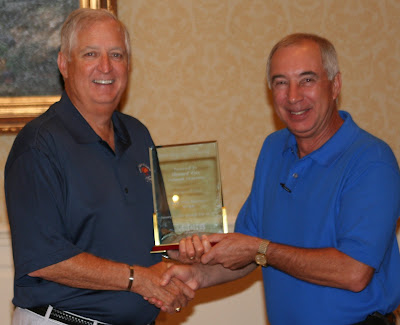 Andrew Woodham, marketing manager of the South Carolina Homebuilders Self Insurers Fund, presented Howard L. Cox an award as the Number One Producer for the Self Insurance Fund.

The award was presented to Cox at the most recent agents advisory council meeting. Woodham said, “Howard was our very first agent and continues to work hard and provide outstanding leadership and service to his clients and our fund. His experience is valuable to our industry."

Howard is a Certified Insurance Counselor who specializes in risk management for Home Builders.
Posted by The Home Builders Association of Greenville at 4:48 PM No comments: