Services were held Wednesday, December 3, 2014, at Woodlawn Memorial Park. Condolences may be sent to the family at www.thomasmcafee.com.
Posted by Michael Dey at 4:37 PM No comments:

On Wednesday, December 3rd your Home Builders Association hosted our annual Past Presidents Luncheon at Larkins' on the River, sponsored by J-Freeman & Associates. There was lots of smiling faces, stories, and advice for the incoming 2015 HBA President. The group will also welcomed current president Mike Freeman of ACA/ Freewood Contracting to their distinguished club.

Thank you for your service and dedication to our association and the industry!

Past Presidents who have served the HBA of Greenville: 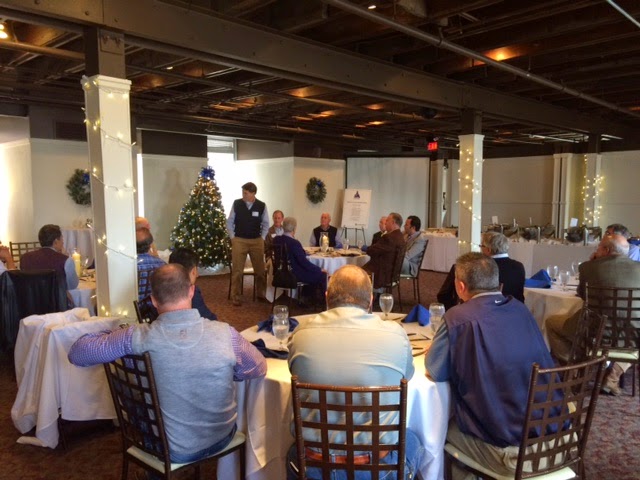 Posted by Unknown at 1:20 PM No comments:

In a big win for Home Builders and the home buyers we represent, the International Code Council (ICC) has taken a significant step forward in ensuring that code change proposals come with disclosure of their price tags.

In its press release announcing the opening of the 2015/2016/2017 code development cycle, ICC also announced that it will require all advocates to include the costs associated with any proposals introduced along with the paybacks, where appropriate.

It’s exactly what NAHB Chairman-elect Tom Woods asked for when he addressed the ICC board on September 29 and called on code change proponents to provide “quantitative information regarding the magnitude of the expected increase in construction costs.”

“NAHB commends the ICC for approving this landmark ruling that will require all code change proposals to include cost estimates. By acknowledging that costs are an important factor in determining the merit of code change proposals, this will make the building codes process more cost-effective and affordable. In turn, this will help keep housing costs down, enable builders to construct more energy-efficient homes and allow more young families to enter the new home buying market.”

This issue has been an important concern for Home Builders, as noted in this recent Eye on Housing blog.

To learn more about the ICC and the code development process, NAHB has provided a code toolkit that includes suggested amendments to make the latest versions of the 2015 family of ICC codes more affordable and practical. HBA members must be logged in to nahb.org to download and view the toolkit.
Posted by Michael Dey at 9:48 AM No comments:

By a wide bipartisan of 378-46 margin, the U.S. House last night approved H.R. 5771, the Tax Increase Prevention Act, which will renew scores of temporary tax provisions known as “tax extenders” that are set to expire this year.  Severa are of interest to the housing community. The one-year retroactive renewal is through 2014 and dates back to January 1.

NAHB is disappointed that a longer-term deal was not reached, but the political situation and the calendar have forced Congress into a one-year deal everyone hoped to avoid.

Just one week ago, Congress was headed to a bipartisan, bicameral deal which would have extended all of the expired provisions for two years through 2015. The agreement also would have made a handful of extenders, like the research and development tax credit, permanent.

Just hours after word of the agreement leaked out, the White House scuttled the deal by announcing the President would veto any bill that contained these permanent provisions.

In a letter to the House prior to the bill’s passage, your Home Builders Association urged lawmakers to support the legislation. We also expressed concern that these short-term tax bills create difficulties for our members by denying builders the certainty needed to finance complex projects and called on Congress to act quickly on a longer-term deal in early 2015

Key provisions in the tax extenders package for 2014 (retroactive to January 1) include:
The Senate is expected to take up and pass H.R. 5771 next week.
Posted by Michael Dey at 9:28 AM No comments:

The City of Greenville released the following statement this week regarding its staffing levels in Building Codes Administration, and a planned fee increase:

"Due to the unprecedented growth that the city of Greenville is experiencing, and the resulting increase in construction activity, the City of Greenville’s 2014-2015 budget included funding for three additional positions in the Building and Property Maintenance Division. The new positions included two inspectors and a plan routing technician, and were created as part of the City’s efforts to meet the increased demand for services and streamline the permitting and inspection processes. Additional plans include utilizing technology to increase inspectors’ productivity and time in the field, and expanding the current data management system to provide the public with real-time inspection results, online permitting and access to project plan review management. To that end, the City’s budget also included a 10 percent increase in fees for building, electrical, mechanical and plumbing permits, which will be effective January 1, 2015."

Buddy Skinner, Building Codes Administrator, also reports that the city will be moving to a new, web-based permitting system called Click2Gov during the first quarter of 2015.  With the new program, permit requests, inspection results and payment will be conducted online.

Buddy Skinner will be our guest speaker at the next Builder Breakfast, date to be determined but in late January or early February, to demonstrate the new system to builders.  Stay tuned for more information.
Posted by Michael Dey at 10:07 AM No comments:

A total of 50 men's, women's, and children's coats collected through the month of November for Miracle Hill!

As many were making their way to the HBA of Greeenville Annual Meeting, Featuring Jerry Howard and sponsored by PestBan, on November 13th they brought a new or gently used coat with them. Many coats were brought to the TD Center for the meeting but for those that were not able to attend the meeting the HBA office had collection bins on hand.
Your HBA of Greenville is so excited to help those in need by helping provide warmth this winter to someone less fortunate.

The Community Service Committee is thankful for your support and participation. Happy Holidays!

Posted by Unknown at 5:17 PM No comments:

Nationally, interest rates on conventional purchase-money mortgages increased from September to October, according to several indices of new mortgage contracts.

The National Average Contract Mortgage Rate for the Purchase of Previously Occupied Homes by Combined Lenders index was 4.11 percent for loans closed in late October, up 5 basis points from 4.06 percent in September.

The average interest rate on all mortgage loans was 4.11 percent, up 4 basis points from 4.07 in September.

U.S. house prices rose 0.9 percent in the third quarter of 2014 according to the Federal Housing Finance Agency (FHFA) House Price Index (HPI). This is the 13th consecutive quarterly price increase in the purchase-only, seasonally adjusted index.

“Easing interest rates and modestly improving labor market conditions helped to drive up prices in the third quarter,” said FHFA Principal Economist Andrew Leventis. “The price increases were relatively small in most areas, however, and are consistent with the type of market deceleration that other housing market statistics have shown in recent periods.”

FHFA’s expanded-data house price index, a metric that adds transaction information from county recorder offices and the Federal Housing Administration to the HPI data sample, rose 1.5 percent over the prior quarter. Over the last year, that index is up 6.0 percent. For individual states, price changes reflected in the expanded-data measure and the traditional purchase-only HPI are compared on pages 17-19 of this report.

Significant Findings:
FHFA’s “distress-free” house price indexes, which are published for 12 large metropolitan areas, have tended to show lower quarterly appreciation in recent periods than FHFA’s traditional purchase-only indexes. In the third quarter, however, the distress-free measures do not show systematically different price changes than the purchase-only indexes.

Background:
FHFA’s purchase-only and all-transactions indexes average house price changes in either repeat sales or refinancings on the same single-family properties. The purchase-only index is based on more than 7 million repeat sales transactions, while the all-transactions index (calculated using both sales prices and appraisal values from refinance mortgages) includes more than 51 million repeat transactions. Both indexes are based on data obtained from Fannie Mae and Freddie Mac for mortgages originated over the past 38 years.

Posted by Michael Dey at 1:54 PM No comments:

The Federal Housing Finance Agency (FHFA) has announced that the maximum conforming loan limits for mortgages acquired by Fannie Mae and Freddie Mac in 2015 will remain at $417,000 for one-unit properties in South Carolina.  That amount is the conforming loan limit for the majority of the county. The loan limits are established under the terms of the Housing and Economic Recovery Act of 2008 (HERA) and are calculated each year.

Although other counties experienced home value increases in 2014, after other elements of the HERA formula were accounted for the local-area limits were left unchanged.

A list of the 2015 maximum conforming loan limits for all counties and county-equivalent areas in the country can be found here.
Posted by Michael Dey at 11:01 AM No comments:

Workers’ Compensation Fraud: What to Look For

When someone fakes or exaggerates a job-related injury or illness to collect benefits, it often causes insurance rates to go up, which can leave employers with less money to provide employees with raises, paid vacations and other benefits.

While the majority of workers’ comp claims are filed in good faith, experts agree that a number of them are fraudulent and that employers should be on the lookout for the following warning signs.

Red flags include claimants who:
Employers should exercise extreme caution before confronting an employee they suspect of fraud. Uncovering a fraudulent claim can result in substantial savings, but a competent investigator and legal counsel should be consulted before any action is taken against an employee. Doing so will help you steer clear of false accusations that could lead to costly litigation.
Posted by Michael Dey at 10:18 AM No comments:

Please remember the family and friends of William Davis, father-in-law of Milton Shockley, RE/MAX Realty Professionals.  Services were held November 25, 2014.
Posted by Michael Dey at 9:33 AM No comments:

Please keep Past President Keith Smith in your thoughts and prayers.  Keith is recovering from a stroke and vascular surgery.  He is at home and says he is recovering well.
Posted by Michael Dey at 9:32 AM No comments: