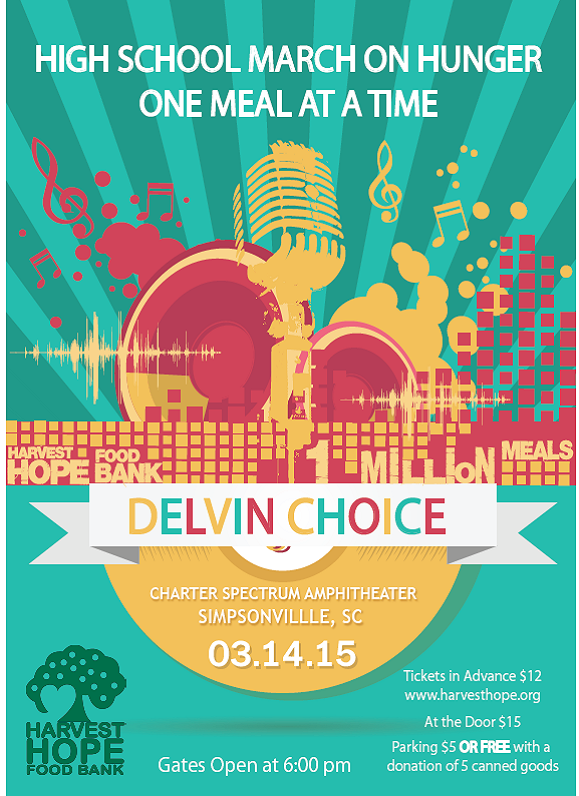 The Harvest Hope Youth Leadership Board, comprised of 23 Greenville County High School Students, is marching to end hunger on Saturday, March 14! Their goal is to raise ONE MILLION meals for the Upstate. Delvin Choice of The Voice will join the march and perform.

The concert will take place at the Charter Amphitheater at 861 Southeast Main Street in Simpsonville, SC. Gates open at 6:00.

Come out to enjoy a great evening of music and help us raise 1 MILLION MEALS to end hunger in the Upstate! Tickets are just $12 when booked in advance or $15 at the door. Parking is $5 or FREE with donations of at least five canned goods for Harvest Hope.

U.S. house prices rose 1.4 percent in the fourth quarter of 2014 according to the Federal Housing Finance Agency (FHFA) House Price Index (HPI). This is the fourteenth consecutive quarterly price increase in the purchase-only, seasonally adjusted index. FHFA’s seasonally adjusted monthly index for December was up 0.8 percent from November.

“Contrary to prior indications of a possible slowdown, home price appreciation in the fourth quarter was relatively strong,” said FHFA Principal Economist Andrew Leventis. “The key drivers of appreciation over the last few years—low inventories of homes available for sa​le and improvement in labor markets—likely played a role in driving up prices during the quarter.”

FHFA’s expanded-data house price index, a metric that adds transaction information from county recorder offices and the Federal Housing Administration to the HPI data sample, rose 1.3 percent over the prior quarter. Over the last year, that index is up 6.0 percent. For individual states, price changes reflected in the expanded-data measure and the traditional purchase-only HPI are compared on pages 17-19 of this report.

Significant Findings:
FHFA’s “distress-free” house price indexes, which are published for 12 large metropolitan areas (page 33), have shown lower quarterly appreciation in the last several quarters than FHFA’s traditional purchase-only indexes. In more than half of the areas covered, the new series—which removes short sales and sales of bank-owned properties—shows lower quarterly appreciation than the purchase-only series in the fourth quarter.
Posted by Michael Dey at 9:02 AM No comments:

Nationally, interest rates on conventional purchase-money mortgages decreased from December to January, according to several indices of new mortgage contracts.

The National Average Contract Mortgage Rate for the Purchase of Previously Occupied Homes by Combined Lenders index was 3.88 percent for loans closed in late January, down 10 basis points from 3.98 percent in December.

The average interest rate on all mortgage loans was 3.89 percent, down 11 basis points from 4.00 in December.