We will update you when we know memorial arrangements.
Posted by The Home Builders Association of Greenville at 9:40 AM No comments:

Awards season is coming up- Are you using the HBA to help market your product?

Awards season is coming up fast...and while we still have a few months to go have you thought about how you can use an award to market your business? It is really very simple and many of our 2013 Bridge Award winners are already displaying and using their Bridge Awards, along with the HBA membership logo, as a marketing tool.
So, keep your eyes and ears out for more information in the months to come about the 2014 Bridge Awards along with other ways to market your business to consumers and those in our industry.

If you would like more information on the HBA of Greenville logo and using it in your materials please contact the HBA office at 864-254-0133.
Take a look at how these members are using the HBA to help with their marketing.

Posted by Unknown at 9:25 AM No comments:

Construction Lending on the Rise

One factor holding back a stronger rebound in home construction has been the tight availability of acquisition, development and construction (AD&C) loans. However, recent data confirm that net lending is on the rise.

According to data from the FDIC and NAHB analysis, the outstanding stock of 1-4 unit residential AD&C loans made by FDIC-insured institutions rose by $1.952 billion during the first quarter of 2014, a quarterly increase of 4.46%.

It is worth noting the FDIC data report only the stock of loans, not changes in the underlying flows, so it is an imperfect data source. Nonetheless, the consistent growth in the outstanding stock of AD&C loans is a positive development. NAHB surveys of builders also suggest improving lending conditions.

However, lending remains much reduced from years past. The current stock of existing residential AD&C loans (the blue area on the graph below) of $45.7 billion now stands 77.6% lower (denoted by the red line) than the peak level of AD&C lending of $203.8 billion reached during the first quarter of 2008. 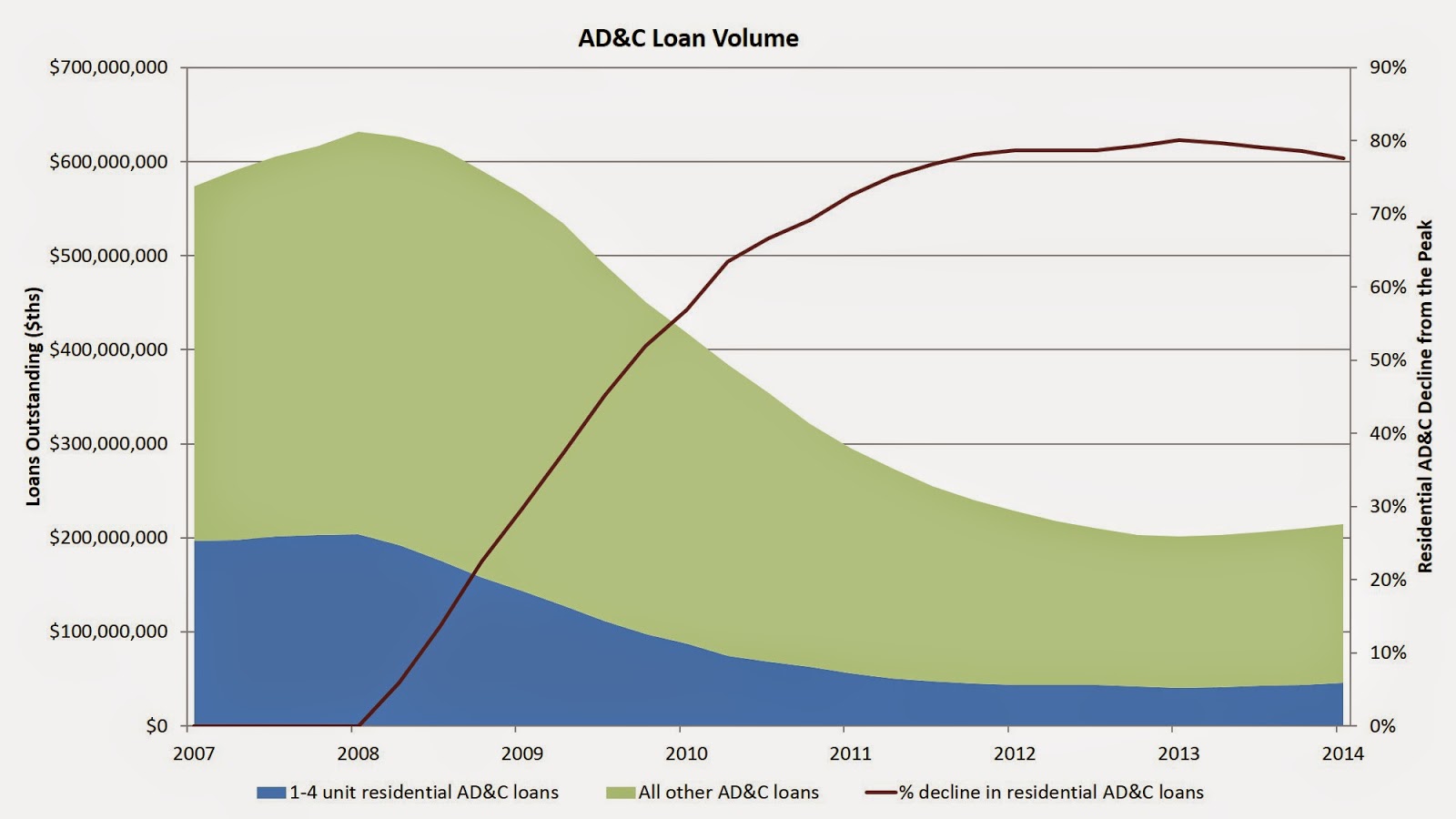 The FDIC data reveal that the total decline from peak lending for home building AD&C loans continues to exceed that of other AD&C loans (nonresidential, land development, and multifamily). Such forms of AD&C lending are off a smaller 61.6% from peak lending. This class of AD&C loans has now registered three quarters of significant increases (1.5% for the first quarter of 2014).

Despite the recent uptick in residential AD&C lending, there exists a lending gap between home building demand and available credit. This lending gap is being made up with other sources of capital, including equity, investments from non-FDIC insured institutions and lending from other private sources, which may in some cases offer less favorable terms for home builders than traditional AD&C loans.
Posted by The Home Builders Association of Greenville at 1:37 PM No comments:

Profile of a member of the Home Builders Association

Your Home Builders Association conducts an annual census of its builder and associate members in order to better understand the composition and characteristics of its membership. The census collects company as well as demographic information. This blog entry summarizes findings from the 2013 Builder member census, with a more extensive article available here. A later entry will summarize findings from the 2013 Associate member census.

Over half of builder members in 2013 were single-family builders (58%), and about a quarter were residential remodelers (24%). Far smaller shares were involved with multifamily building or commercial remodeling (5% each), and commercial building or land development (4% each). Less than half of 1% were manufacturers of modular/panelized/log homes. 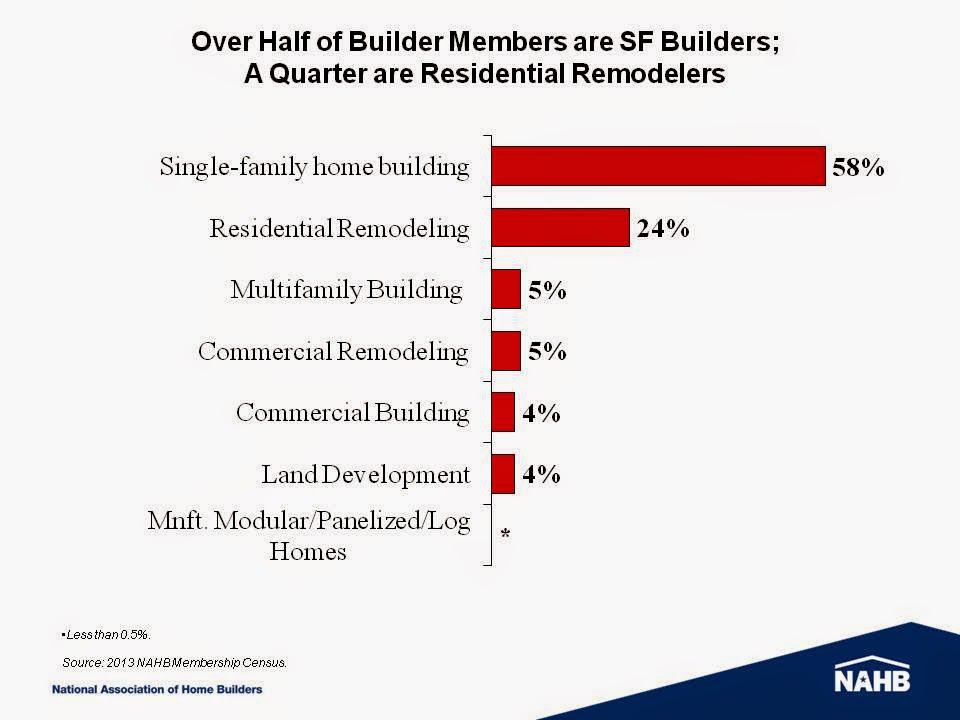 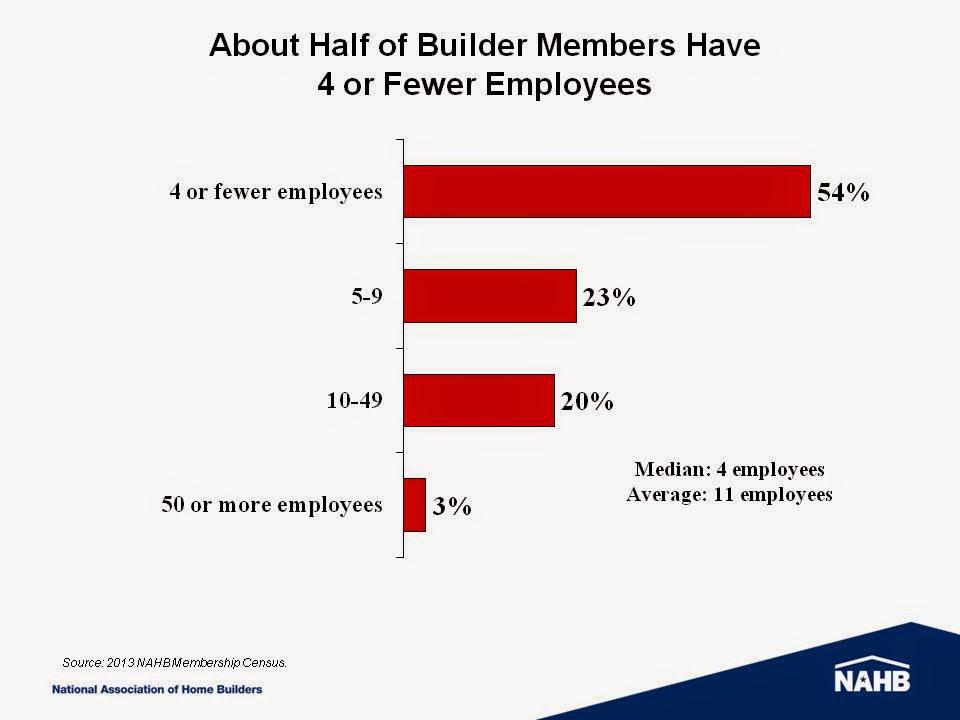 Home Builders Testifies Before Congress on Health of Housing Market

The health of housing is key for the overall state of the U.S. economy and housing stands poised to serve as an engine of job growth with the right policies in place, the National Association of Home Builders (NAHB) told Congress.

Testifying before the Senate Banking Committee's Subcommittee on Economic Policy during a hearing examining the drivers of job creation, NAHB economist Robert Dietz said that home building and remodeling have generated 274,000 jobs over the past two and a half years.

"This expansion has direct economic benefits," said Dietz. "Housing provides the momentum behind an economic recovery because home building and associated businesses employ such a wide range of workers."

Employment from new home construction and remodeling has a wide ripple effect. About half the jobs created by building new homes are in construction. They include framers, electricians, plumbers and carpenters. Other jobs are spread over other sectors of the economy, including manufacturing, retail, wholesale and business services.

Currently, housing comprises about 15.5 percent of GDP but Dietz said the industry still has room to grow.

"Typically, housing represents 17 to 18 percent of the GDP," he said. "With a growing population and an aging housing stock, NAHB forecasts that single-family construction will increase 22 percent in 2014 to 760,000 units and multifamily production will rise six percent to 326,000 units."

Noting that 2014 should be the first year since 2007 in which total housing starts exceed one million homes, Dietz said this expansion will produce jobs. "In April alone, home builders and remodelers added 13,100 jobs," he said.

NAHB estimates that total housing construction over the next few years should return to just under 1.7 million combined single-family and multifamily starts on an annual basis.

Homeownership also represents the most important investment and source of savings for most middle class households.

The latest economic data show that the primary residence represents 62 percent of the median home owner's total assets and 42 percent of their wealth. Moreover, almost two-thirds of all U.S. households own a home, while just 50 percent possess a retirement account and only 16 percent own stocks and bonds.

Though homeownership remains a cherished American ideal, access to safe and decent affordable rental housing is needed for those households for whom renting is the best choice. The Low Income Housing Tax Credit, the nation's only affordable housing production program, serves a critical role in this regard. Since its inception, the tax credit has produced and financed more than two million affordable rental apartments.

Industry Faces Several Challenges
While home construction is poised to continue to expand and add jobs, builders continue to face persistent headwinds. These include access to building lots, rising building material prices, access to builder loans and worker shortages in some markets.

Additional challenges are the lack of policy certainty in areas connected to housing. To help the industry play its traditional role as a job creator, Dietz called on Congress to ensure that undue regulatory burdens do not hinder economic and job growth. "Regulations imposed by the government at all levels account for 25 percent of the final price of a new single-family home built for sale," he said.

On the tax front, Dietz urged lawmakers to protect the mortgage interest deduction and Low Income Housing Tax Credit, which are critical to ensuring the growth of the middle class and access to affordable housing, and to enact a tax extenders bill that would retroactively extend expired tax rules such as the minimum nine percent credit rate for the Low Income Housing Tax Credit and residential energy efficient tax credits for new construction and for retrofitting existing homes.

Passing comprehensive housing finance reform that includes a federal backstop to ensure the availability of the 30-year mortgage, increase private capital in the marketplace and protect the American taxpayer would be a net positive for job creation, he added.
Posted by The Home Builders Association of Greenville at 5:01 PM No comments:

Lowe’s Home Centers, one of the nation’s largest home improvement retailers, has agreed to implement a comprehensive, corporate-wide compliance program at its over 1,700 stores nationwide to ensure that the contractors it hires to perform work minimize lead dust from home renovation activities, as required by the Federal Lead Renovation, Repair, and Painting (RRP) Rule, the Department of Justice and the U.S. Environmental Protection Agency (EPA) announced on April 14, 2014. The company will also pay a $500,000 civil penalty, which is the largest ever for violations of the RRP Rule.

The government complaint alleged that Lowe’s failed to provide documentation showing that the contractors it hired to perform renovation projects for Lowe’s customers had been certified by EPA, had been properly trained, had used lead-safe work practices, or had correctly used EPA-approved lead test kits at renovation sites. EPA’s investigation showed that at three homes located in Alton, IL, Trotwood, OH, and Kent OH, Lowe’s contractors failed to ensure that work areas had been properly contained during renovations and cleaned up after renovations.

EPA discovered the violations through a review of records initially prompted by tips and complaints submitted by the public.

Posted by The Home Builders Association of Greenville at 2:56 PM No comments:

How big a role can building codes play in reducing energy waste?

That is the question economists at the University of Oregon and Yale University sought to answer by comparing monthly utility bills of 2,200 Gainesville, FL, homes built three years before and three years after Florida strengthened it building code in 2002.

According to the study, homes built after the change consumed, on average, 4 percent less electricity and 6 percent less natural gas—savings that homeowners achieved in a variety of ways, including using less-leaky air ducts, more-heat-resistant windows, better insulated attics and certain white roofing products.

The report estimated that the cost of compliance with the new code was less than $1,000 per house, with an average recoupment time for home owners of about 7 years.

Posted by The Home Builders Association of Greenville at 2:53 PM No comments:

Big Builder released its report of the top 100 and next 100 home building building companies in America.  Those doing business in the Upstate are:

See the complete list at Builder by clicking here.

One key provision of the legislation, which still requires the approval of the Governor, is that it preempts any local ordinances.  Effective April 1, 2014, the City of Greenville enacted a very restrictive ordinance prohibiting the use of any mobile device while driving or idling.  If approved by the Governor, this and other local ordinance will be nullified.

OSHA urges employers to prevent texting while driving
In OSHA’s April 15, 2014, issue of “Quick Takes,” its twice-monthly e-newsletter, it took the opportunity to remind employers that they have a responsibility to protect their workers by prohibiting texting while driving. Companies are in violation of the Occupational Safety and Health Act if, by policy or practice, they require texting while driving, or create incentives that encourage or condone it, or they structure work so that texting is a practical necessity for workers to carry out their job.

New Member Reception and Meet the Board - Tuesday, June 10th

Your HBA of Greenville will host our newest members at the New Member Orientation and Meet the Board sponsored by PestBan on June 10th at the HBA Office from 5:30 -7 p.m.
For more information or to RSVP for this event please call the HBA office at 864-254-0133.

Posted by Unknown at 9:32 AM No comments:

GMM & Housing Summit with the City of Greenville- June 17th

Join us for a General Membership Meeting & Housing Summit
How-To Successfully Build & Develop in the City of Greenville
June 17th at The TD Convention Center from 8:30am -11:00am
From start to finish, learn how to most effectively get your project done in a timely and economical manner.
Topics to include: engineering, rezoning, subdivision planning, and permitting.
FREE for

Sponsorship opportunities available!
Posted by Unknown at 9:20 AM No comments: