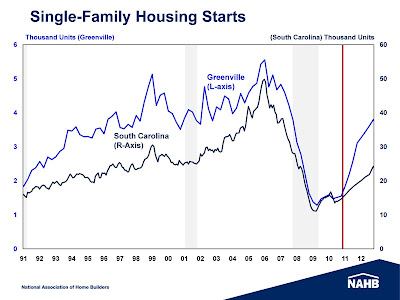 More than 100 members and guests of the Home Builders Associations in the Upstate assembled this week to hear the housing market forecast for the Upstate, the state, and the nation.

The country also is rebounding, but will take much longer to return to a normal level of activity and will not reach 1 million starts before 2014, still well below 1.6 million, the level considered necessary to meet demand. Factors contributing to the slow recovering include tight credit restrictions for home builders and high levels of inventory and foreclosures in the nation's largest housing markets. Dr. Crowe reported that 70 percent of all foreclosures were concentrated in 12 states. Florida leads the way with 23 percent of all foreclosures in the nation.

Factors contributing to the recovery include historically low interest rates, which are expected to remain near historic lows for the rest of the year, high levels of affordability, strong job creation, particularly in the Upstate. Dr. Crowe also reported that pent-up demand, caused by a slowing of household formation, will heavily influence housing market recovery as the rest of the economy recovers and household formation returns to normal.

Positive factors influencing the Upstate include fundamentals like home price to income, which did not fall out of balance in the Upstate like it did nationally, and unemployment, about which Dr. Crowe reported that the Upstate is now below the state and the nation.

To view Dr. Crowe's presentation, click here and open the document at the bottom of the page.
Posted by Michael Dey at 9:01 AM No comments:

NVR Homes, which builds under Ryan Homes in the Upstate, hass been named the Environmental Protection Agency's Energy Star Partner of the Year.

Host of Uncertanties Drives Down Housing Starts and Permits in February

"The decline in new construction and permits in February is the culmination of a great deal of nervousness that both builders and consumers are feeling right now," said NAHB Chairman Bob Nielsen.

"In an already fragile market where credit for building and buying homes remains extremely tight, additional concerns about energy costs, interest rates and other factors are contributing to an atmosphere in which many have adopted a very cautious stance," Nielsen said.

Read the entire article at Nations Building News by clicking here.
Posted by Michael Dey at 9:57 PM No comments: