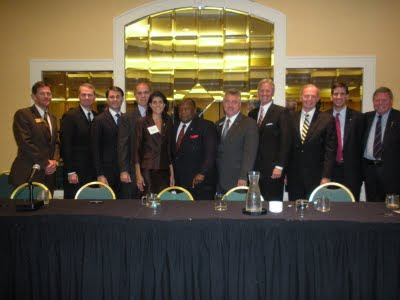 Your Home Builders Association of South Carolina held its annual Legislative Conference this week in Columbia. The meeting kicked off with a candidate forum with the various announced candidates for Governor of the State of South Carolina.

The candidates discussed their points of view on various policy issues and answered questions from the audience.

The forum was followed by a Legislative Planning meeting in which members participated in the development of the association's legislative agenda for 2010. Mandatory fire sprinklers, point-of-sale property assessments, reform of the Building Codes Council, and public school infrastructure funding were discussed as well as numerous other issues.

The day wound up with an oyster roast at the HBASC office near the State House in Columbia.
Posted by Michael Dey at 1:34 PM No comments: 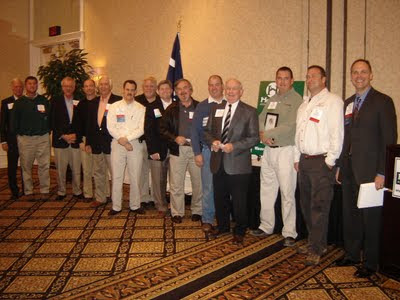 Your Home Builders Association of Greenville held its Annual Meeting and Spike Appreciation Luncheon today at the Greenville Hilton. The agenda included recognition of Spike Members, election of the 2010 Board of Directors, and approval of amendments to the association's bylaws.

Barry Rutenberg, Third Vice Chairman of the National Association of Home Builders, addressed the membership. He provided a report on the national housing industry and the steps NAHB is taking to address AD&C lending conditions and appraisal rules. He also reported on the new Home Buyer Tax Credit and the new rules on Net Operating Loss Carryback.

Our next meeting will be the association's 50th Anniversary Celebration on January 16, 2010.
Posted by Michael Dey at 5:03 PM No comments:

Last night Greenville County Council voted unanimously to approve the 10-year Comprehensive Land Use Plan at second reading. The plan is required by state law and is not an ordinance, but instead it is a road map for future development.

Before second reading council amended the plan to clarify that the plan is not binding like law, and that unzoned areas are unaffected by the plan.

Council will take up the plan again for third and final reading on December 1, and could amend the plan further.

Many members of the Home Builders Association of Greenville participated in the development of the plan through citizen groups that met to consult on the plan's contents. In addition the County Planning Commission, which developed the plan, met last Spring with the Board of Directors and the Legislative Committee of the association to receive the association's input.
Posted by Michael Dey at 12:37 PM No comments:

Are You A Part of the New Economy?

There is a lot of talk about shifting ways of doing business. A book titled “The Tipping Point” gives a good perspective on the changing nature of life and how, one day, suddenly there is a recognized shift in a new direction regarding whatever the subject may be.

For example, do you know exactly when it became taboo to smoke in most public buildings? Probably not. But if you are over 50 or just watch movies made before 1960, you know that every nook and cranny of every office and restaurant was filled with cigarette or cigar smoke because smoking in public places was an accepted practice. Today, it is almost hard to imagine that was true. But back then, it was hard to imagine that there would ever be such things as smoke-free workplaces or buildings. One day, the issue reached its “tipping point.”

Our industry needs to be cognizant of tipping points which impact housing. We’ve been moving toward a tipping point on green construction over the past decade. We hear more and more HBA members showing interest in green building as they recognize that more and more buyers are asking about it. We also hear that there will be a greater demand for higher density lifestyles in the years to come—both from necessity and personal preference.

There are thousands of foreclosed properties on the market. One person’s problem becomes another person’s opportunity. As prices adjust, we will reach a tipping point when a surge in demand for new housing will again occur.

America currently has about 110 million occupied housing units. About 75 million are owner occupied. Demographers say our population will rise by about 35 million over the next 10 years. We should be building about 1.5 million new homes per year to meet the growing demand. We are currently building at an annualized rate of only about 500,000. Very old homes deteriorate and a few burn down. Many people opt for newly built homes over their used ones for the excitement, the modern features and design as well as perceived long term financial benefits.

Children are still growing up and forming households and we have a large immigrant population adding growth as well. When we get through the foreclosure bubble, we should start to see this mix create a tipping point of strong demand for new homes. How soon will that come? Our industry built more than 2 million homes nationally in 2006 and 2007, a surplus of roughly 1 million homes. Add to that nearly 1 million foreclosures, and you will understand why it will take at least another year for that inventory to be absorbed.

Where will financing come from? New and creative sources are emerging as new players who made their money outside of housing look at home building opportunities. They will be alongside the traditional banking sources.

The very best way for you to keep up with the rapid changes is to stay in touch with your Home Builders Association—its website, its publications and its meetings. Add to that the same items from the National Association of Home Builders and you have at your fingertips the expert knowledge that you need to draw upon as we reach new “tipping points” in the home building industry.

Our HBA will remain on the cutting edge—just like our expansion this year into social networking—with our Twitter followers, our bloggers, and our Facebook page and friends. A site on LinkedIn is coming soon. We also are nearing an exciting announcement of a new website feature to connect builders with those who are searching the Internet for a new home.

Recent survey data shows that builders are largely still advertising and marketing the “old” way and not spending sufficient time connecting with buyers who are overwhelmingly starting their new home search on the internet. To operate profitably in the new economy, you better be prepared to stay informed. No where will you be better informed than through the HBA. Be sure to keep your membership up-to-date and invite your colleagues to do the same!
Posted by Michael Dey at 6:24 PM No comments: