The listing of the Northern Long-Eared Bat as threatened under the Endangered Species Act becomes effective May 4 – and that’s a change that will affect more than 1,750 counties in the Eastern and North Central United States, including Greenville and Pickens counties.

The action restricts the removal of trees of certain sizes and diameters between mid-April and mid-September, which is the bats’ migration season.

Your Home Builders Association believes that the U.S. Fish and Wildlife Service (FWS) has underestimated the degree of the impact of this listing. Specifically, FWS does not understand the time-sensitive nature of home building and assumes proposed projects that may affect the bats’ summer habitat can simply wait until they start hibernating in October.

Once the listing is effective, any property with or near known hibernation or maternity roost sites will need to consult with regulators and get a permit to proceed – a process likely to delay work for several months or even years, depending on the kind of permit needed.

While NAHB will seek an exemption for our members under the 4(d) rule, projects undertaken after May 4 must comply with the ESA rulings. Learn more by reading this FAQ.
Posted by Michael Dey at 2:11 PM No comments:

The State Convention is Changing Seasons

The Home Builders Association of South Carolina is pleased to announce the return of the HBASC State Convention to Asheville, NC! The convention will deliver a valuable benefit to our members and to provide a distinct advantage to anyone in the home building industry and also allow you and your family time to socialize, compete and have some fun.

The convention will provide you the perfect platform to acquire new business strategies, while increasing your knowledge of current building industry practices. It will offer an ideal and fun environment for establishing relationships and a means for increasing business profitability. Education sessions presented by the industry's most prominent experts, coupled with relaxing social events and the possibility for personal downtime, makes the convention a unique opportunity your entire family will enjoy.

Click here for more information and to register.
Posted by Michael Dey at 10:19 AM No comments:

Learn How to Help Customers Help You

Builders and remodelers aren't just selling a project; you are selling the entire experience. But customer expectations can create unexpected obstacles.

Join NAHB Wednesday, May 6, 2015 from 2:00-3:00 PM ET for our webinar, The Remodeler's Guide to Happy Customers - Managing Emotional Home Owners. Remodeler and business consultant David Lupberger will draw on more than two decades of experience in the residential remodeling field to offer tips on managing emotional home owners and guiding them through every step of the process, in addition to managing the project itself.

Register now!
Posted by Michael Dey at 10:14 AM No comments:

NAHB: Housing Recovery Slow and Steady in 2015, Will Pick Up Pace Next Year 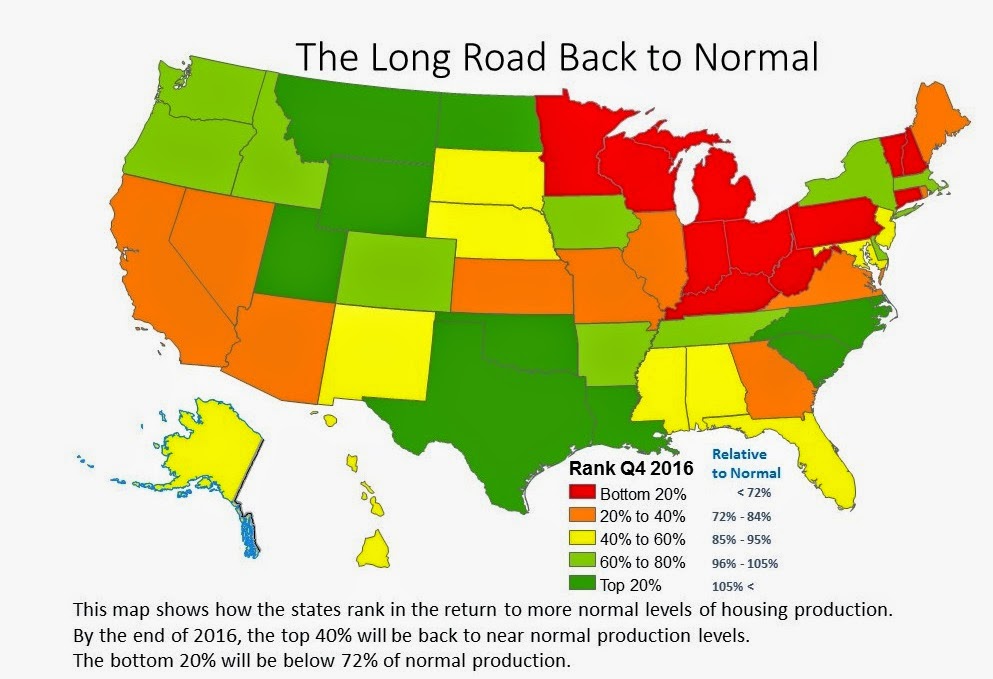 Solid employment gains, attractive mortgage rates, a growing economy and pent-up demand will help keep the housing market moving forward throughout 2015 and into next year, according to economists who participated in yesterday’s NAHB 2015 Spring Construction Forecast Webinar.

“This should be a good year for housing, buoyed by sustained job growth, rising consumer confidence that is back to pre-recession levels and a gradual uptick in household formations,” said NAHB Chief Economist David Crowe. “We expect 2016 to be even better, due to a significant amount of pent-up demand and an economy that will be entering a period of reasonable strength and consistency.”

Over the past seven years, Crowe estimates the slow recovery and uncertainty in the job and housing markets resulted in 7.4 million lost home sales. “While some of these sales will never take place, this does indicate how many sales were lost as fewer households decided to move. We expect at least some of these to return in the form of new home sales as job and economic growth continue to firm.”

A key demographic to help jump-start this process should come from the millennials.

The share of first-time home buyers has traditionally averaged around 40% but in the aftermath of the housing downturn it now stands at just under 30%. First-time buyers are expected to provide a boost to the housing market, as the unemployment differential between young people and others is shrinking, Crowe noted.

Single-Family on the Rise
Turning to the forecast, the NAHB Remodeling Market Index, which averages ratings of current remodeling activity with indicators of future activity, stands at 57 in the first quarter of 2015 and has been at or above 50 most of the past two years. A reading above 50 indicates that more remodelers report market activity is higher (compared to the previous quarter) than report it is lower.

NAHB is projecting that residential remodeling activity will increase 2.3% in 2015 over last year and rise an additional 2.4% in 2016.

On the multifamily side, production ran at 355,000 units last year, which could be considered a normal level of production, and is expected to continue in that range or modestly higher through 2015 and 2015.

“New home price growth is fastest in the coastal states and eight of the top 10 healthiest new sale markets are in the Carolinas and Texas,” said Khater.

Of the top 100 new-home sale markets, Houston leads the pack at 2,000 sales per month, followed by Dallas and Atlanta, which are running at about half that pace. In terms of volume, the bulk of the concentration is in southern markets.

“Nashville and San Jose stand out as the fastest growing markets and Atlanta and San Antonio are the best large markets,” said Khater.

Only three new-sale markets are larger today than in 2000 – Nashville, Oklahoma City and San Antonio.

“We Really Have Turned the Corner”
Also delving beneath the national numbers, NAHB Senior Economist Robert Denk said that the housing recovery continues to vary by state and region.

“Housing demand is now being driven by population growth and employment and income growth,” said Denk. “We are reconnecting to underlying fundamentals. We really have turned the corner.”

“The recent decline in oil prices is not hurting housing,” said Denk. “We haven’t seen it yet. We still expect energy output to be higher at the end of this year than last year.”

In another way of looking at the long road back to normal, by the end of 2016, the top 40% of states will be back to near normal production levels, compared to the bottom 20%, which will still be below 75%.

“What we are seeing, no matter what bucket you are in, the numbers are getting better,” said Denk. “There’s a broader recovery all around.”

The Consumer Financial Protection Bureau will institute new rules August 1 regarding disclosures under the Truth in Lending Act and Real Estate Settlement Procedures Act that will affect all home builders, particularly those with a real estate lending arm.

Under the new procedures as a result of the Dodd Frank Act, four documents will be merged into two. The Good Faith Estimate and Truth in Lending disclosures will be eliminated and combined into a new single Loan Estimate form, or “LE.”

In addition, the final Truth in Lending Disclosure and HUD-1 Settlement Statement are being replaced by the Closing Disclosure, or “CD.”

What does this mean?First, the Loan Estimate must be delivered to the prospective buyer no later than three business days after receiving the application.

Currently, the HUD-1 Settlement Statement can be presented to the buyer on the day of closing and any changes to the statement can take place during the loan closing.

Under the new rule, the biggest change is that the Closing Disclosure must be provided to the consumer a full three days prior to the closing, and if there are changes during that 72-hour period, the closing could be delayed.

Be Ready a Week Before Closing
To prevent any unwanted closing delays, a good rule of thumb is to have all the paperwork in order a week before the scheduled closing date. So if you want to close August 10, make sure everything is ready August 3.

These new rules are intended to streamline the loan application process and make it easier for consumers to understand by clearly spelling out the most relevant details all on one page – the interest rate of the mortgage loan, the amount of the monthly payments and a listing of all the closing costs.

For those applying for adjustable rate mortgages, the documents will explain how their interest rate and future monthly payments could change based on certain factors.

NAHB was actively involved during the rulemaking process, submitting comment letters both individually and with coalition partners urging the CFPB to ensure that any changes that would make it easier for consumers to understand and comply with the settlement process would not place any undue burdens on builders, lenders and other housing professionals.

NAHB will conduct a webinar June 24 to educate and prepare our members for the impending changes and to show how builders can work proactively with lenders and settlement stakeholders to avoid unnecessary delays to closings. The webinar will also outline strategies to minimize potential issues by communicating with customers and business partners.

See more details on the upcoming new lending rules.
Posted by Michael Dey at 9:58 AM No comments:

The FHFA HPI is calculated using home sales price information from mortgages sold to or guaranteed by Fannie Mae and Freddie Mac. From February 2014 to February 2015, house prices were up 5.4 percent. The U.S. index is 2.9 percent below its March 2007 peak and is roughly the same as the January 2006 index level.

When responding to OSHA’s requests for information per the updated recordkeeping rule, make sure to keep these tips in mind:

Posted by Michael Dey at 9:18 AM No comments:

On January 1, the Occupational Safety and Health Administration’s (OSHA) new reporting requirements took effect requiring employers to notify the agency any time there is a workplace fatality, hospitalization, amputation, or eye loss.

The new reporting rules have greatly increased the number of reports the agency receives.

To handle the influx, the agency recently developed and issued “Interim Enforcement Procedures for New Reporting Requirements.” The procedures have not yet been made public; however, they have been reported by the Bureau of National Affairs (see Daily Labor Report, Feb. 18).

Here’s how the new procedures will work:
Employers facing a reportable incident should keep these considerations in mind:

Posted by Michael Dey at 9:07 AM No comments:

The Federal Housing Finance Agency (FHFA) today announced the results of its comprehensive review of guarantee fees charged by Fannie Mae and Freddie Mac (the Enterprises). FHFA has determined that current fees, on average, are at an appropriate level and that some modest adjustments to upfront guarantee fees are also appropriate.

As a result of its review, FHFA is directing Fannie Mae and Freddie Mac to eliminate the adverse market charge put in place in March 2008 and to replace the revenue that resulted from the adverse market charge with targeted increases in guarantee fees to address various risk-based and access-to-credit considerations. In making adjustments to the guarantee fees for certain categories of loans, FHFA took into account its decision – also announced today – to strengthen financial and operational eligibility standards for mortgage insurance companies. Overall, the set of modest changes to guarantee fees are roughly revenue neutral for the Enterprises and will result in either little or no change for most borrowers.

“This is the culmination of months of review and analysis and reflects input received from a wide range of stakeholders,” said FHFA Director Melvin L. Watt. “Our goal is to assure taxpayers, homeowners and industry that we are striving for an appropriate balance between safety and soundness and liquidity in the housing finance market,” Watt said.

FHFA will continue to monitor guarantee fees closely and make adjustments, as necessary, on an ongoing basis.

Click here to read the Fact Sheet.
Posted by Michael Dey at 11:12 AM No comments: