Greenville is ranked by website as 6th best place to live

RelocateAmerica.com ranked Greenville 6th on its list of "Top 100 Places to Live." The basis for its rankings in 2011 include positioning for economic recovery, currently strong economic growth, and proven overall economic stability. Factors also high on the list include employment, education, community leadership, and quality of life.

Click here to read the report and review the list of Top 100 Places to Live at RelocateAmerica.com.

Click here to view the "Where Americans Are Moving" map at Forbes.com. Then click on the county you are curious about.
Posted by Michael Dey at 3:41 PM No comments:

EPA to start over on sediment loading in stormwater discharges

The Environmental Protection Agency decided yesterday to reconsider the imposition of a nationwide cap on how much sediment can be part of the stormwater draining from a construction site. The agency's announcement comes more than 18 months after NAHB sued EPA over its first proposal to develop a numeric limit for the turbidity, or cloudiness, of stormwater discharges, which the EPA voluntarily withdrew recognizing that it was not legally defensible. The decision is a nod to the importance of sound science – and a big victory for home buyers, according to the National Association of Home Builders (NAHB).

In addition, NAHB estimated that attempting to comply with the regulations would carry a $10 billion annual price tag – stunting new home production and forcing costs up for home buyers.

Today, the agency announced that it still couldn't justify any specific limit and will start over to develop a limit it can defend with science. EPA will talk to home builders, environmental scientists and other members of the public to gather better data – a solution that NAHB has advocated for more than three years.

"EPA set a numeric limit for water cloudiness that was based on flawed analyses," said NAHB Chairman Bob Nielsen, a builder in Reno, Nevada.

Both the Small Business Administration and the federal Office of Management and Budget had warned EPA that the regulation would not hold up, joining NAHB in voicing concerns about the monitoring and sampling requirements.

"In its calculations, EPA relied on questionable data, including figures obtained from the vendors that would have supplied the expensive systems home builders would have been required to use. That's no way to come up with national policy," Nielson said.

Because terrain, geography and rainfall vary significantly in most regions of the country, NAHB has long held that a nationally applicable numeric limit is neither defensible nor practicable. "It's our hope that EPA's research will take that fact into account," Nielsen said.

In the meantime, NAHB is redoubling its efforts to collect turbidity data from its members' construction sites to help ensure that the eventual ruling makes good scientific sense.

"Stormwater management must be straightforward, affordable and workable," Nielsen said. "That's the only way we can continue to make progress. NAHB supports responsible development and the goals of the Clean Water Act. The association will continue to work with state and federal regulators to keep our waterways clean," Nielsen said.

Posted by Michael Dey at 2:19 PM No comments:

Fox News profiled down town Greenville in a 90-second segment this morning, the second time Greenville has been featured in the national press in the last two weeks.

According to the Greenville News, FOX News producers became interested in Greenville when they were here in May for the Republican Presidential Debate at the Peace Center in Downtown Greenville.

Click here to watch the FOX News profile of Greenville.

Click here to see the recent NPR feature.
Posted by Michael Dey at 8:56 AM No comments:

South Carolina, and the Upstate, measure up well 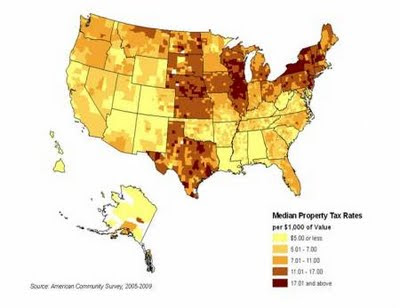 The research should be useful for prospective homebuyers and businesses in the housing industry interested in comparing effective property tax payments across narrowly defined geographic areas.

According to the report, the national average property tax rate is $10.35 per $1,000 of property value. The South Carolina average is $5.01. The average for the Greenville MSA is $5.40. The Greenville MSA ranks 340 out of 387 cities measured. South Carolina ranks 46 out of the 50 states. The states with the highest property taxes include Texas, Nebraska, Illinois, and Wisconsin. The states with the lowest property taxes include Louisiana, Alabama, and West Virginia.

An “effective property tax rate” is simply the amount of property tax paid divided by the value of the home, thus giving an apples-to-apples comparison of true tax burden for homes in various locations. The alternative to an effective rate measurement is to compare statutory tax rates, which can be misleading given differences in assessment rules, tax credits, and other complicating factors.

The data reveal wide differences across counties, with median real estate taxes ranging from around $110 per home in several Louisiana parishes to more than $8,000 per home in Hunterdon County, N.J., and in Nassau and Westchester Counties in New York. Similarly, real estate tax rates display a wide range of values, from less than a dollar per $1,000 of value in two Alaska Census areas to around $30 per $1,000 of value in several New York counties.

Drilling the data down to the smaller geographic confines of Census “tracts” — small subdivisions of a county with populations between 2,500 and 8,000 — the data show that even within counties, effective property tax rates can vary significantly. As expected, a large portion of inter-tract differences can be explained by their regional location, with tracts located in the Midwest, Northeast and Texas paying considerably higher property tax rates per $1,000 of value, compared to tracts in the South and West regions.

As the report notes, this is a reflection of a well-known and long-established tradition in which southern states tend to rely less on real estate taxes as a source of government revenue.

As we have noted before, despite dramatic declines in housing values, homeowners continue to pay about the same nominal level of property tax payments, thus leading to higher effective tax rates. This is due to lags in accruate assessments by taxing jurisdiction, but also out of necesssity due to declining sources of state and local tax revenue during the recession.
Posted by Michael Dey at 1:56 PM No comments:

The housing market awaits a solid economic recovery that provides potential home buyers the confidence to move forward with a major purchase. The S&P downgrade and the attendant stock market plunge adds to uncertainty and consumer discomfort as they see their wealth fall, again. But, the real underlying question is whether the economy is headed for a double dip or whether the stock market is simply over-reacting to the string of poor economic reports, the debt ceiling debacle and now the downgrade. The probability of a double dip has increased, but that outcome remains unlikely.

My money (literally) is on a continued but slow economic recovery that will eventually convince the pent up housing demand to come back into the market. Consumer confidence has been slow to respond to the economic bright spots, but some durables such as vehicles and furniture experienced growth throughout 2010 and into 2011. Employment did pick up solidly in early 2011. Many of our foreign trading partners continue to expand and buy US exports even as Europe hesitates. Credit is tight but not as tight as it was. Local economies based in energy or agriculture, particularly in the Midwestern farm belt and Plains states, are showing improved economies, rising employment and even home building.

Recent GDP revisions have indicated that high oil prices, political turmoil (overseas and at home), disaster in Japan and the inability to decisively conclude the debt/deficit debate have taken a higher toll on production and consumption than previously understood. But, even accounting for these events, the first half performance was poor. The second half of 2011 is primed to see improvement. Consumers have been repairing their balance sheets, paying down debts and saving more. Businesses have cut expenses to the bare bones and, until very recently, improved productivity. Inventories are stable and will need replenishment as we move forward.

Housing market conditions are primed for a recovery. Interest rates are low and the Standard and Poor’s downgrade is not likely to affect rates in any appreciable way. House prices have bottomed in many smaller markets although the national indexes continue to show some weakness as they are heavily influenced by large markets with an oversupply of existing homes.

NAHB forecasts a slow economic recovery that will be softened further by the investor worries. However, NAHB is not forecasting a double dip recession. Growth will likely improve from the annual rate of less than 1% in the first half of this year to 2.5 to 3.0% in the second half, with more solid growth coming next year. As momentum builds and employment and incomes being to gain ground, consumers’ confidence will improve and the recovery will gain speed in 2012 and 2013.
Posted by Michael Dey at 1:51 PM No comments:

The relatively unchanged single-family picture was reinforced in the NAHB/Wells Fargo Housing Market Index for August which also remained even with the July figure at 15. Builders continue to compete against low demand and excess supply in some markets from foreclosures, short sales and other distressed sales. Multifamily permits were down national and in all but the South region, suggesting some moderation in the growth in apartment building in the second half of 2011.

Single-family permits were near even on a national level but up in the Northeast and West, even in the Midwest and down 1.4% in the South. Homes under construction remained very near their levels of the past three months as builders saw no signs to either hurry or slow building activity. Housing completions did surge in the South where single-family completions went from a second quarter average of 226,000 to 269,000 and multifamily went from a second quarter average of 40,000 to 92,000. Both increases were greater than the national increase and are likely catch up construction from unusually bad weather and floods.