The case against Case-Shiller

The difference between the two indexes is considerable.  The FHFA House Price Index is a measure of all housing markets in the country based on mortgage activity backed by Fannie Mae and Freddie Mac.  The Case-Shiller Index measures just the top 10 and top 20 housing markets in the country.  Case-Shiller tracks repeat home sales over time.  FHFA is indexed to the contract mortgage amounts.

And therein lies the problem with the Case-Shiller Index; it measures just the largest housing markets, which is not a reflection of the whole country.  Most markets in the country don't come anywhere close to the 50,000 housing starts each year that were commonplace in markets like Atlanta.  And most housing markets did not experience the massive over building that occurred in many of the top housing markets, primarily because the smaller markets did not have the capacity to build on the scale that is possible in the largest markets.

Even more interesting is the fact that Robert Shiller, one of the founders of the Case-Shiller Index, was quoted by Reuters this week that the housing market will remain weak for a generation because suburban areas have lost their appeal to "walkable cities," the result of high gas prices.  Gas prices may be a factor if you live 30 miles from work in suburban Atlanta, but compact markets like Greenville will not be impacted by gas prices in the same way that a sprawling top 20 market is impacted.

The continued reliance on data from the top 10 or 20 markets in the country as a barometer for the whole housing market provides a false sense of what is happening in the rest of the country.  For example, in Greenville building activity is up 60 percent in the last year.  And bear this in mind: just like the Case-Shiller Index provides an incomplete measure of housing today, it also provided an incomplete measure of housing seven years ago when those top 20 markets were red hot.  Could reliance on incomplete data have contributed to the overheated housing market of the recent past.  Is incomplete data contributing to the current overbearing regulation of housing activity today, particularly in smaller prospering markets like Greenville?

Federal regulators, banks, Congress, the White House, and the media would be better served to evaluate housing market-by-market, rather than rely on an index that is limited to just 20 out of the 270 markets in the nation.  Even though Case-Shiller says it measures 75 percent of the housing activity in the country, it still only measures 7 percent of the individual housing markets.
Posted by Michael Dey at 4:50 PM No comments: 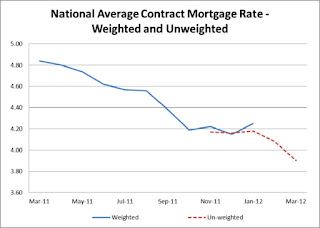 The Federal Housing Finance Agency (FHFA) today reported that the National Average Contract Mortgage Rate for the Purchase of Previously Occupied Homes by Combined Lenders, used as an index in some ARM contracts, was 3.90 percent based on loans closed in March. Beginning in March, FHFA is calculating interest rates using un-weighted survey data. There was a decrease of 0.18 percent from the previous month.

The average interest rate on conventional, 30-year, fixed-rate mortgage loans of $417,000 or less decreased 24 basis points to 4.12 in March. These rates are calculated from the FHFA’s Monthly Interest Rate Survey of purchase-money mortgages (see technical note).  These results reflect loans closed during the March 26-30 period. Typically, the interest rate is determined 30 to 45 days before the loan is closed. Thus, the reported rates depict market conditions prevailing in mid- to late-February.

This report contains no data on adjustable-rate mortgages due to insufficient sample size.


Piedmont Natural Gas will host an HBA of Greenville Appreciation Night during Downtown Alive this week.

What: HBA of Greenville Appreciation Night at Downtown Alive
When: Thursday, April 26, 5:30 p.m. until 8:00 p.m.
Where: Piedmont Natural Gas' VIP area on Main Street next to the Hyatt Downtown Hotel

No registration necessary. Simply show up and enjoy the evening and food and beverage, catered by Larson's, with Piedmont Natural Gas.
Posted by Michael Dey at 8:57 AM No comments:

U.S. house prices rose 0.3 percent on a seasonally adjusted basis from January to February, according to the Federal Housing Finance Agency’s monthly House Price Index. While prices in January were unchanged according to initial estimates reported in the last HPI release, the January result has been revised downward to reflect a 0.5 percent decrease. For the 12 months ending in February, U.S. prices rose 0.4 percent, the first 12-month increase since the July 2006 - July 2007 interval. The U.S. index remains 19.4 percent below its April 2007 peak and is roughly the same as the January 2004 index level.

The FHFA monthly index is calculated using purchase prices of houses backing mortgages that have been sold to or guaranteed by Fannie Mae or Freddie Mac. For the nine census divisions, seasonally adjusted monthly price changes from January to February ranged from -1.0 percent in the West North Central and Middle Atlantic divisions to +1.9 percent in the Mountain division.

We found this blog post funny, and very true.

From "One Block Off The Grid" (1BOG): 5 strange signs the economy is improving:


Read the complete report at 1BOG by clicking here.
Posted by Michael Dey at 9:31 AM No comments:

Labels: economics, One Block Off The Grid

Call for Nominations to HBA of Greenville Board of Directors

The HBA Nominating Committee has begun work on identifying and recommending to the membership a slate of officers and directors for 2013.  Elections will be held at our Annual meeting in November.

If you have an interest in serving in one of the following positions, or know of a member we should consider, please contact Michael Dey, Executive Vice President of the HBA of Greenville, or me or a member of the Nominating Committee.

The following positions on the HBA of Greenville Board of Directors are open for nominations:

Click here to send an email to Michael Dey about nominations.

I would like to thank the members of the Nominating Committee for their participation:
Wayne Moore, Immediate Past President
Posted by Michael Dey at 5:50 PM No comments:

Permits Extended in 2008 will expire this year

Permits excluded from this “pause” period, include a number of federal permits and administrative consent orders. The law allows a government entity to revoke or modify a development approval as permitted by law, and it has no effect on Certificate of Need or Demonstration of Need certificates issued by DHEC.

The extension of the “time-out” may be one of our issues for the 2013 legislative session, but it is important to plan now for the expiration of any permits on December 31 that were extended by this law.
Posted by Michael Dey at 11:43 AM No comments:

The saga of the on again, off again NLRB Poster Rule has taken another turn, and this time South Carolina businesses played an active role.

The controversial rule requires employers to prominently display a poster advising workers of their right to unionize.  It was set to go into effect on April 30 after a brief delay resulting from previous court challenges.  But a challenge in U.S. District Court for South Carolina has resulted in suspension of NLRB's controversial proposed rule.

On Friday, April 13, 2012, the U.S. District Court for South Carolina, in a case brought by the U.S. Chamber of Commerce, ruled that the National Labor Relations Board (NLRB) exceeded its authority in adopting a rule requiring employers to post an employee notice of collective bargaining rights.

Judge David C. Norton held that the NLRB’s authority is limited to adjudicating unfair labor practices, and that Congress did not impart the agency with authority to compel employers to post labor rights notices.

This decision has created a split among jurisdictions, as just last month, the U.S. District Court for the District of Columbia ruled in a case brought by the National Association of Manufacturers (NAM) that the NLRB had the authority to promulgate the rule, but that failure to comply with the rule did not by itself constitute an unfair labor practice or serve to toll the statute of limitations for filing an unfair labor practice complaint. NAM has filed for appeal in this case.

Following on the heels of the South Carolina decision, on Tuesday, April 17, the United States Court of Appeals for the District of Columbia granted a temporary injunction blocking implementation of the rule pending the appeal filed by NAM. The poster rule had been scheduled to go into effect on April 30, 2012, but this is no longer the case.

The injunction stays the implementation, and employers nationwide will not have to post the collective bargaining rights poster, pending the outcome of this appeal.

NAHB continues to monitor all events concerning the poster rule and provide notification to HBA members regarding future rulings.  For more information about the poster rule, visit http://www.nlrb.gov/poster.