The South Carolina Chapter of the US Green Building Council has honored Upstate builder Todd Usher with a 2014 Duke Energy Leadership in Green Building Award.  Usher was the 2008 President of the Home Builders Association of Greenville.

This award — presented during the organization’s annual meeting Oct. 1 – recognizes Usher’s “above and beyond” efforts to further the cause of green building in South Carolina.

As president of Greenville-based Addison Homes, Usher focuses exclusively on sustainable construction, certifying 100 percent of his homes to environmental standards such as Energy Star, LEED for Homes, the National Green Building Standard and/or DOE Zero Energy Ready Home. In addition to leading the industry by example, Usher promotes the benefits of green building to the mainstream market via community education and outreach.

“Addison Homes is honored to receive the Duke Energy Green Building Leadership Award and we congratulate our fellow recipients as well,” says Usher. “It is a privilege – and a responsibility – to build increasing awareness of eco-friendly construction.”
Posted by Michael Dey at 12:00 PM No comments:

Yes, Millenials aspire to own a home

A recent survey of younger Americans illustrates that the goal of homeownership remains an important part of the American Dream.

The economic future of Millennials is key to the future of housing demand. A record number of individuals aged 18 to 34 years are delaying household formation as a consequence of the Great Recession. In a recent Eye on Housing blog post, this situation was referred to as the “Great Delay,” as slow wage growth and rising student loan burdens have reduced attainment of traditional goals associated with the American Dream, including marriage and homeownership.

An important research question is whether these delays represent deferrals due to economic conditions or true changes in preferences and goals.

A recent survey from the Demand Institute provides new evidence. The study surveyed 1,000 18- to 29-year-olds about current conditions and market preferences. The findings indicate that homeownership remains an important long-term goal.

Among the findings for Millennials:

For more details, read the survey findings from the Demand Institute.
Posted by Michael Dey at 9:18 AM No comments: 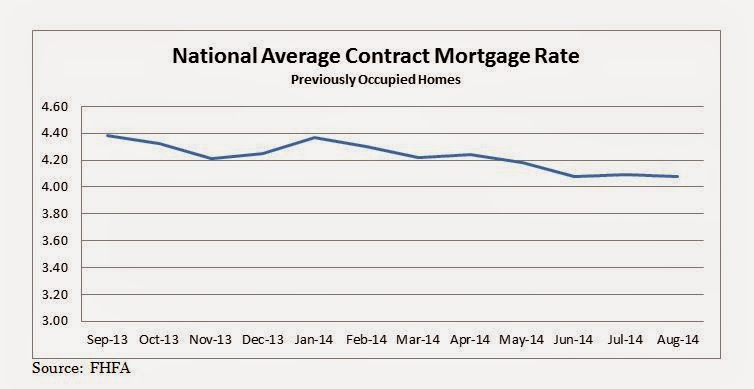 The National Average Contract Mortgage Rate for the Purchase of Previously Occupied Homes by Combined Lenders index was 4.08 percent for loans closed in late August, down 1 basis point from 4.09 percent in July.

The average interest rate on all mortgage loans was 4.09 percent, reflecting no change from July.

Now, these industry professionals can complete these assessments online: at a lower cost and with a quicker turnaround time.

While builders and remodelers had often enjoyed the networking opportunities that are part and parcel of the BAR and PREP, the logistics were too daunting for too many potential candidates: Travel costs and time away from work add up and prevented these professionals from benefiting from these advanced designations.

The new online assessment tools remove those barriers – and add incentives, including:
Students have the option to take the BAR and PREP online or in person through Dec. 31. However, only the online version of these assessments will be available to students next year, effective Jan. 1, 2015.
Posted by Michael Dey at 9:26 AM No comments:

Home builders and remodelers who install large capacity water heaters (greater than 55 gallons) need to be aware that revised federal energy standards that go into effect in April 2015 are expected to have a significant impact on space requirements for these water heaters and on the way they are installed.

Smaller water heaters must also comply with the increased energy-efficiency requirements and are expected to be more costly as a result. However, they are not expected to have additional space and/or venting requirements like the larger capacity units.

The revised standard was imposed by the Department of Energy and will go into effect following a five-year transition period to allow manufacturers to gear up for production of the more efficient units. As of April 2015, manufacturers will no longer be allowed to construct water heaters not meeting the new requirements, but builders and remodelers will still be able to install the existing stock.

Water heaters that comply with the new energy-efficiency standard are expected to be more costly and bulkier than current models. In particular, some current models of large capacity electric water heaters may no longer be available because the higher energy factor standards will require heat pump water heater technology. This new technology requires the water heater to be installed in an area with sufficient household air volume for heat exchange.

In preparation for the new energy-efficiency standard, builders and remodelers who routinely install large capacity water heaters are encouraged to reach out to manufacturers for details about availability and space and venting requirements. NAHB will continue to follow this issue and will provide members with information about installation and potential alternatives to the larger capacity units as it becomes available.

To read more about changes to efficiency standards for water heaters, click here.
Posted by Michael Dey at 9:24 AM No comments: 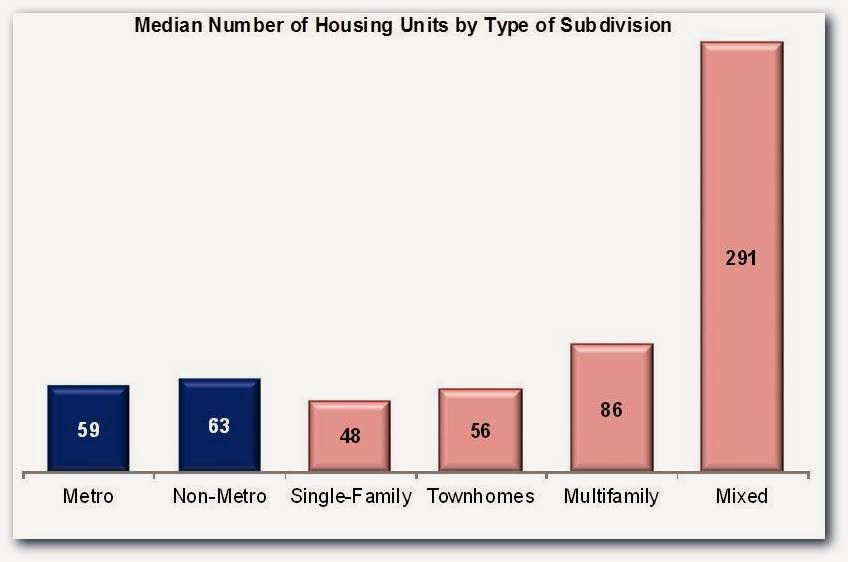 A landmark survey conducted by your Home Builders Association provides a unique look at a typical residential subdivision being built today. The results were recently published as a Special Study in HousingEconomics.com.

Not surprisingly, the typical characteristics vary quite a bit depending on the type of subdivision. This chart shows how the number of homes per subdivision varies across six basic types.

To establish a consistent, working concept of a metropolitan area, the survey provided a brief summary of the Office of Management and Budget definition: a densely settled urban area and surrounding counties tied to the urban area by frequent commuting. In terms of number of housing units, subdivisions inside and outside of metropolitan areas are quite similar. The median number of housing units in subdivisions built inside metro areas is 59, and the median outside is 63.

For additional details, including a separate profile for each of the six basic subdivision types, consult the full study at NAHB.org.

Posted by Michael Dey at 9:15 AM No comments: