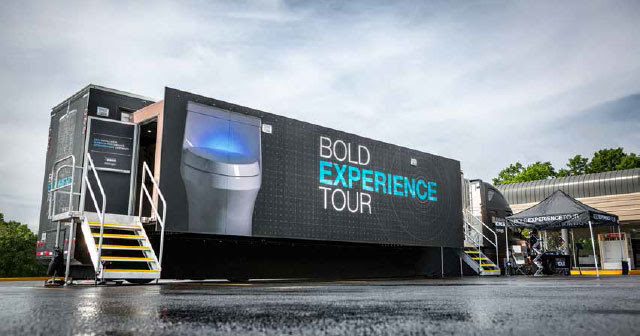 HBA Builder members, you have the opportunity to take the Kohler Experience Tour right here in Greenville. Kohler will be here Monday, April 24, from 11 a.m. until 2 p.m. Lunch will be served compliments of your HBA of Greenville and HBA member CBUSA.

Location is at the Downtown Airport, 100 Tower Drive, in the remote parking area.

Posted by Michael Dey at 2:37 PM No comments:

Your fellow HBA members serve and support their community

With the leadership of your HBA's Community Service Committee, chaired by Richard Bernath of Southern Traditions Window Fashions, your fellow HBA members are at work around the community helping others in need of a hand up.

On April 8, a group of members led by Eddie Howard of Howard Custom Builders, Joshua Alford of Custom Remodel and Handyman Service, and Michael Dey of the HBA of Greenville, built a wheel chair ramp for a veteran living in Central, SC.  The project, which was facilitated by Rebuild Upstate, took just a morning, but the result will improve the life of a veteran for many years.

Members have another opportunity to give a family a hand up on April 22.  Your HBA is volunteering for a day with Habitat for Humanity to build a new home at 9 Hope Bridge Way in Greenville.  Shift times are 8 a.m. until 11:30 p.m. and 12 noon until 3:30 p.m.  Consider volunteering a little of your weekend to serve the community that gives so much to our industry.  Contact Michael Dey for details.


This Spring, your HBA Government Affairs Committee has been screening candidates for Greenville City Council.  We started with John DeWorken, candidate for the at-large seat on City Council.  This week we met with Matt Cotner, candidate for Council District 2.  We also met with Russell Stall, another candidate for the at-large seat on City Council.  The Government Affairs Committee will meet again on May 3 and May 17 to complete its screening and recommendations for support, which will be considered by the HBA Board of Directors.  City election primaries are June 13.
Posted by Michael Dey at 10:16 AM No comments:

Inclusionary Zoning: why it does not work


This week the South Carolina Senate held a public hearing before a Judiciary subcommittee to consider legislation to allow South Carolina cities and counties to impose Inclusionary Zoning on home builders and developers.  Inclusionary Zoning is a regulation where government mandates that private home builders and developers sell or rent some homes at below-market prices without any financial participation from government.

I would like to provide you with some additional research and information on inclusionary zoning and why, in almost all cases, this regulation worsens the affordable housing problem in the communities where it has been implemented.

Attached is our policy paper on the subject. In addition, I have outlined below why an inclusionary zoning regulation would contribute to the affordable housing problem in Greenville, rather than improve it.

However, we must assume that the developer will pass the lost profit on in the form of an increase in the prices of the remaining 90 percent of their development that is being sold at market-rate prices.

The average price of a newly-constructed single-family home in the Greater Greenville area is approximately $270,000. The average home builders' net margin is about 5 percent. That is their profit. Some are more profitable. Others are not. That is an average.

Therefore, the home builder will need to increase the prices of the remaining 90 percent of market-rate housing units by $15,000 each.
According to the National Association of Home Builders' Priced Out Effect study (nahb.org/pricedout), a $1,000 increase in the cost of a new home in Greenville, South Carolina, prices out 520 households from purchasing a new home. Therefore, that $15,000 increase in the price of a new home, the result of an Inclusionary Zoning Ordinance mandating that 10 percent of the project be sold at below-market prices, will price out 7,800 families from purchasing a new home as a result of the ordinance—PER YEAR.

Granted, I am applying the Priced Out data, which is a regional statistic, to the City of Greenville. However, I believe it fairly describes the cause and effect of an Inclusionary Zoning ordinance.

The lot cost is a combination of raw land cost plus development and infrastructure costs, as well as marketing, commissions, and carrying costs (debt), plus profit. Below is how the final lot price is often determined:
If 3 of the lots in the 30-lot subdivision must be sold for $20,000 each in order to produce a house affordable to a buyer earning between 80 percent and 120 percent of median income, the lost $20,000 in cost (the lot cost is $40,000) and the lost mark up of 20,000 per lot, will be added back to the remaining 27 lots.
Therefore, the developer will sell the remaining lots to builders at $66,666 rather than $60,000.

In any final product, the lot is typically 17 percent to 20 percent of the cost of the home. To keep it simple, assume the builder uses a 20 percent value for the lot. Therefore, the builder will build a house that is five times the price of the lot.

When the lot cost increases by $6,666, that means the $6,666 increase in the lot will magnify into a $33,330 increase in the final price of the house. This is how it looks on paper:
With this lot-price control method, the city will have priced out of homeownership 19,314 families in the Greenville area.

You will understand from this analysis why the Home Builders Association has concluded that inclusionary zoning does not work. It, like many other government regulations on the housing industry, such as zoning and rent control, often make us feel like we are doing something constructive when we are, in fact, making the problem worse.

The study by the National Association of Home Builders that we reference in our policy paper has been applied to the Greenville area in the attached graphic. It demonstrates that housing in our community is nearly $70,000 more expensive as a result of regulation. As a result, less than 10 percent of all housing units built today are sold for less than $200,000. Just 17 years ago, 90 percent of all housing units were sold for less than $200,000. Inflation alone does not explain that increase in housing prices.

Our recommendation is that the City of Greenville and Greenville County work with the industry that produces housing to develop a meaningful housing policy for our community that will actually meet housing demand for all of our community’s citizens.

Under supervision of the Deputy Building Official, conducts routine comprehensive site inspections of residential, commercial, new or existing projects to ensure compliance with all codes required by County ordinance. High school graduate with extensive work experience in a related field. Position requires work related for a specific trade such as Building, Electrical, Mechanical or Plumbing for a minimum of five years; or any equivalent combination of experience, training and education. Inspectors must obtain one (1) residential certification within the first year, then a maximum of one (1) year for each additional residential certification. The continuing education opportunities required to maintain certifications are offered by the county.

Must possess a valid South Carolina Driver's License and a copy of a 10 year Motor Vehicle Record is required at time of application.