Why We Desperately Need To Bring Back Vocational Training In Schools

Throughout most of U.S. history, American high school students were routinely taught vocational and job-ready skills along with the three Rs: reading, writing and arithmetic. Indeed readers of a certain age are likely to have fond memories of huddling over wooden workbenches learning a craft such as woodwork or maybe metal work, or any one of the hands-on projects that characterized the once-ubiquitous shop class.

Instructor helps a student participating in a woodworking manufacturing training program in Chicago, Illinois, U.S. Photographer: Tim Boyle/Bloomberg Charlie Negron
But in the 1950s, a different philosophy emerged: the theory that students should follow separate educational tracks according to ability. The idea was that the college-bound would take traditional academic courses (Latin, creative writing, science, math) and received no vocational training. Those students not headed for college would take basic academic courses, along with vocational training, or “shop.”
Ability tracking did not sit well with educators or parents, who believed students were assigned to tracks not by aptitude, but by socio-economic status and race. The result being that by the end of the 1950s, what was once a perfectly respectable, even mainstream educational path came to be viewed as a remedial track that restricted minority and working-class students.
The backlash against tracking, however, did not bring vocational education back to the academic core. Instead, the focus shifted to preparing all students for college, and college prep is still the center of the U.S. high school curriculum.
So what’s the harm in prepping kids for college? Won’t all students benefit from a high-level, four-year academic degree program? As it turns out, not really. For one thing, people have a huge and diverse range of different skills and learning styles. Not everyone is good at math, biology, history and other traditional subjects that characterize college-level work. Not everyone is fascinated by Greek mythology, or enamored with Victorian literature, or enraptured by classical music. Some students are mechanical; others are artistic. Some focus best in a lecture hall or classroom; still others learn best by doing, and would thrive in the studio, workshop or shop floor.
And not everyone goes to college. The latest figures from the U.S. Bureau of Labor Statistics (BLS) show that about 68% of high school students attend college. That means over 30% graduate with neither academic nor job skills.
But even the 68% aren’t doing so well. Almost 40% of students who begin four-year college programs don’t complete them, which translates into a whole lot of wasted time, wasted money, and burdensome student loan debt. Of those who do finish college, one-third or more will end up in jobs they could have had without a four-year degree. The BLS found that 37% of currently employed college grads are doing work for which only a high school degree is required....continue reading.
Posted by Unknown at 3:51 PM No comments:

Lot Leads, Get the dirt on available lots.

Blackstream Real Estate recently contacted your Home Builders Association concerning available lots. There is currently 30.98 acres available off Old McElhaney Rd and is developable. If you would like more information on this please contact Jonathan Kesseler at Jonathan.kessler@svn.com.

Please see below the flyer for more information. 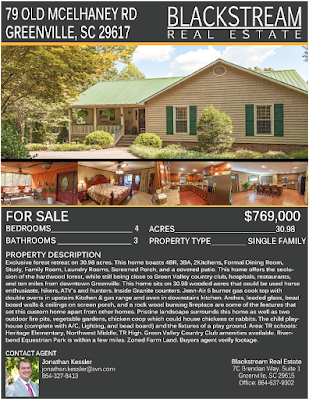 Posted by Unknown at 3:05 PM No comments:

From The Atlanta Journal-Constitution:

In the past five years, while the population was growing, the number of renters has increased by nearly 6 million. The number of homeowners has dropped by 328,000.

The story explores recently-released Census data on home ownership trends. Read more by clicking here.
Posted by Michael Dey at 7:56 AM No comments: