Here is a great gift in honor of National Home Remodeling Month: At long last – and after constant pressure from the National Association of Home Builders (NAHB) – the Environmental Protection Agency (EPA) has been told to get to the bottom of the issue of faulty lead paint test kits with a series of public meetings that will start in early June.

As remodelers well know, the Lead: Renovation, Repair and Painting Rule requires them to use expensive lead-safe work practices in all homes built before 1978 unless the homes have been tested to be lead-free.

The catch: Even though the introduction of an accurate, inexpensive lead paint test kit was part of the rule when it was written in 2008, that test kit never appeared when the rule became law in 2010.

Now, the choices are to either conduct an expensive, time consuming test or instead do the work under the presumption that lead-based paint is there. And that often triggers additional compliance costs and unneeded record-keeping requirements, costing remodelers and consumers time and money.

This has resulted in textbook examples of reverse incentives all over the country. Too many home owners who did not want to pay the additional costs of working with an EPA-certified renovator chose to work with fly-by-night operators who slid under the regulatory radar – and who possibly put the home owners at risk with their work practices.

This lose-lose situation is now changing.

On April 28, NAHB co-hosted with the National Center for Healthy Housing the first in a new series of meetings with regulators to see what is working and what needs to be fixed.

Also in attendance: officials from the Small Business Administration and representatives from industry, lobbyists, local government, and volunteer organizations.

At this meeting, EPA announced plans for the June event: the opening round of ongoing conversations in response to a congressional mandate that EPA step up the pace and figure out a test kit to meet the criteria within the 2008 rule. And that congressional directive is a direct result of your Home Builders Association’s persistent – and successful – advocacy efforts.

If no solution is reached by October 1, Congress has directed EPA to revisit the test kit criteria in the 2008 rule and solicit public comment on alternatives. And if a reliable and affordable test kit is not possible, then it is back to square one for the economic analysis EPA did in advance of the rules and ensure that the costs reflect actual experience.

Learn more about the EPA Lead Paint rule at nahb.org/leadpaint.
Posted by Michael Dey at 3:13 PM No comments:

We would also like to thank our sponsors and volunteers for their help and support in yesterdays event!
Posted by Unknown at 2:03 PM No comments:

Greater Greenville Remains at 92 Percent of Normal in Index

The National Assocaition of Home Builders released its Leading Markets Index this week, and the Greater Greenville market remains at 92 percent of normal.  LMI measures, and averages, three basic criteria: Permits, Housing Prices, and Employment.  Continuing to hold back our market is building permits, largely a function of the absence of younger home buyers.

The Greater Greenville area is defined as Greenville, Pickens, Laurens, and Anderson counties.

Other South Carolina markets are as follows:
To read the full report, click here.
Posted by Michael Dey at 10:57 AM No comments:

The SMC of the Upstate will have a FREE education event for SMC members on May 14th. Don't miss out on the ABC's of Construction with Ryan homes. This event will take a detailed look behind the walls of large scale production builder. Learn the industry lingo you will need to know to effectively sell new construction to your customer. 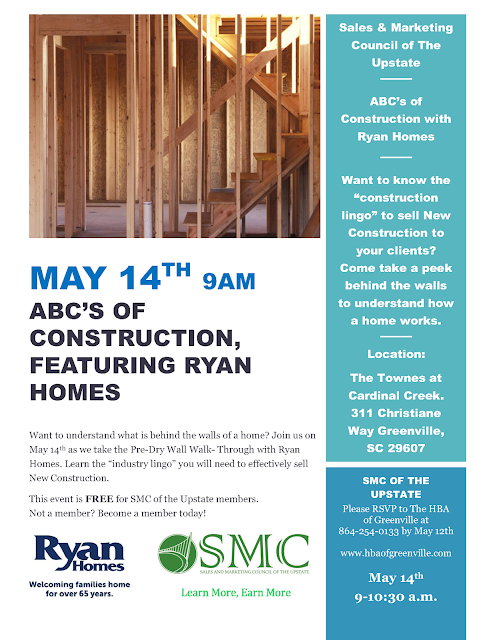 Posted by Unknown at 8:48 AM No comments:

HBA Sponsors The Dollars and Sense of Development Patterns

Your Home Builders Association is the sponsor of a discussion and presentation on May 19 of efficient development patterns in the Upstate.

What: The Dollars and Sense of Development Patterns
When: May 19, 3 p.m. until 5 p.m.
Where:  The Crowne Plaza, 851 Congaree Road, Greenville

Produced by Ten at the Top and Upstate Forever, and also sponsored by the Greater Greenville Association of Realtors, The Dollars and Sense of Development Patterns is the second of four events this year intended to facilitate a discussion of facilitating a vibrant, growing, and efficient Upstate.

Keynote
The featured speaker is Joseph Minicozzi, AICP, principal of Urban 3, LLC, an Asheville-based real estate consultancy affiliated with Public Interest Projects.  Urban3 develops geospatial representations of economic productivity which is designed to change the way a community looks at the concept of urbanism and the value of well-designed cities.  Their case studies help drive planning strategies and tax policies related to urban development patterns.

NAHB Economist
Also speaking will be Robert Dietz, Ph.D., Vice President of Ecomomics at the National Association of Home Builders.  Dietz will present a report of market trends and the results of NAHB's Consumer Preference Study, which focused this year on the preferences of millennials.

Dietz specializes in Tax and Market Analysis for NAHB, where his responsibilities include economic and legal analysis of tax and policy issues, as well as analysis of housing market data. Dr. Dietz has published academic research on the housing and tax issues in peer-reviewed journals. He has testified before the House Ways and Means Committee, the Senate Finance Committee, and the Senate Banking Subcommittee on Economic Policy on housing and tax issues. Prior to joining NAHB in 2005, Robert worked as an economist for the Congressional Joint Committee on Taxation, specializing in revenue estimation of legislative proposals involving housing, urban development, and other business tax issues. He is a native of Dayton, Ohio and earned a Ph.D. in Economics from the Ohio State University in 2003.
Posted by Michael Dey at 11:23 AM No comments:

On May 4, OSHA issued a final rule covering workers who enter confined spaces in construction.

In general, the new rule requires employers to:
Confined spaces are work areas that are not designed for continuous occupancy and may be difficult to exit in the event of an emergency. In home building, some of these may include manholes, sewer systems, crawlspaces and attics

In addition, home builders who hire trade contractors (i.e., subcontractors) to do work in a confined space may also have responsibilities under the new standard.

Builders, or controlling contractors as OSHA labels them, must discuss permit required confined spaces on the site and their hazards with employers who must enter permit required spaces, as well as each other before and after entering the space.

Note: South Carolina is a delegated state for workplace health and safety.  That means that while OSHA may implement a new rule in states where it directly regulates workplace safety, states like South Carolina may lag slightly behind in implementing new Federal rules.
Posted by Michael Dey at 9:15 AM No comments: