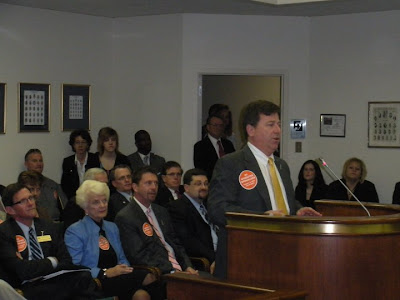 The Labor, Commerce, and Industry Committee of the S.C. House of Representatives approved a bill March 25, 2010, that would prohibit the enforcement of mandatory fire sprinklers in new homes in South Carolina. The bill includes a compromise that requires home builders to disclose to new homebuyers that they have the option to have fire sprinklers installed in their new home.
More than 30 home builders from around South Carolina attended a public hearing on the bill, H.4663 by Rep. Bill Sandifer (R-Oconee and Pickens). Home builder Andy White of Columbia, Chairman of the Legislative Committee of the HBA of South Carolina, spoke in favor of the bill at the hearing. HBA of Greenville President Tom Dillard, CGP, Vice President Wayne Moore, Past President Coleman Shouse, member John Butcher, and Executive Vice President Michael Dey attended the hearing.
The next step for the bill will be for it to be debated in the full House of Representatives as early as two weeks from now. A similar bill, S.1057 by Senator Thomas Alexander (R-Oconee), is pending in the Senate and has already been approved by the Senate Finance Committee.
The 2009 International Residential Code, the building code adopted by the State of South Carolina, is set to take effect on January 1, 2011. The building code includes a new requirement that all single-family homes and duplexes, but not manufactured homes, be built with automatic fire sprinklers installed. Unless legislation is passed in the General Assembly, automatic fire sprinklers will be mandated in new homes next year.
The sprinkler manufacturing industry, along with firefighters and the South Carolina Fire Marshal's Office, are opposing H.4663 and S.1057 and supporting the fire sprinkler mandate in South Carolina.
Posted by Michael Dey at 5:46 PM